With the two Koreas seeking to ease cross-border tensions following the inter-Korean summit last week, the South Korean Army’s mandatory military service is expected to be cut from 21 to 18 months before 2022 when President Moon Jae-in’s five-year term ends.

According to the Ministry of National Defense, the military will submit such plans to Moon this month. On the campaign trail, Moon pledged to cut the period of military service and the number of troops.

If the measures take effect, the Army will see its enlisted soldiers serve 18 months by 2022. In order to achieve the goal, the reduced service time should be applied starting with those joining the military in 2020, military officials said. 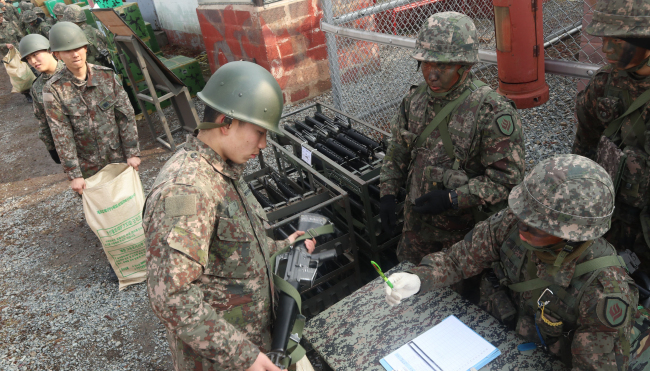 South Korean soldiers received firearms for logistics training at the Army’s 31 Infantry division on Thursday. Yonhap
“We are trying to reduce the service period within the tenure of the current government,” said Defense Ministry Spokesperson Choi Hyun-soo. “We will get back to you about specifics when we announces defense reform plan.”

Last July, Moon unveiled a five-year plan to scale back the mandatory military service period to 18 months from the current 21, along with a separate scheme to reduce the number of armed forces to about 500,000 from 620,000.

Dubbed “Defense Reform 2.0” the scheme also calls for the military to modernize its defense structure tailored to meet North Korea’s asymmetric military threats such as ballistic missiles and nuclear weapons.