WASHINGTON  -- The Pentagon on Wednesday declined to address a controversy over whether American troops could be pulled from South Korea in the event of a peace treaty with North Korea.

The issue emerged as a hot topic after a special adviser to South Korean President Moon Jae-in said the US troops' presence would be "difficult to justify" if a peace treaty was signed to formally end the 1950-53 Korean War.

Moon rejected the idea, saying the US Forces Korea's stationing was an alliance issue that had "nothing to do" with a possible peace treaty, which he and North Korean leader Kim Jong-un agreed to pursue during their summit last week. 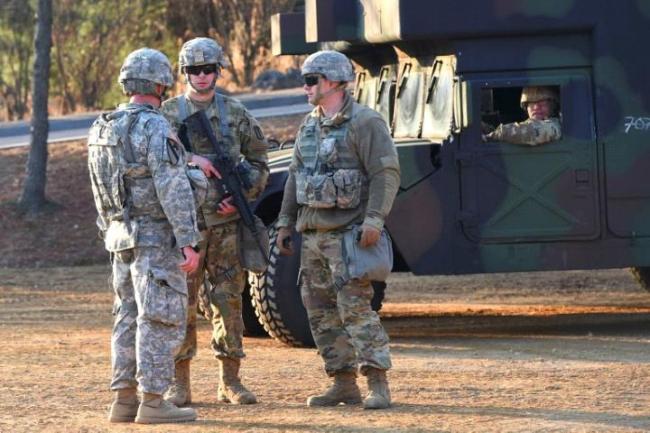 AFP
"It would be inappropriate to discuss the upcoming summit between President Trump and Kim Jong-un and what could be discussed," Lt. Col. Chris Logan, a Pentagon spokesman, said in emailed comments to Yonhap. "We will not speculate on what could happen."

North Korea has long called for a peace treaty with the US, a signatory of the Armistice Agreement that ended the war. It has also demanded the US troops' withdrawal, viewing them as a threat to its regime.

US President Donald Trump recently said he would support a formal end to the Korean War.

US Defense Secretary Jim Mattis has taken a wait-and-see stance.

"Well, that's part of the issues that we'll be discussing in negotiations with our allies first, and of course with North Korea," he said last week when asked if US troops would need to stay in South Korea following a peace treaty.

"So I think for right now we just have to go along with the process, have the negotiations and not try to make pre-conditions or presumptions about how it's going to go," he said. (Yonhap)