[ The Korea Herald – Send E-mail ]
USFK to stay even after peace treaty with NK: President Moon
By Yeo Jun-suk
Published : May 2, 2018 - 09:28
Updated : May 2, 2018 - 18:11
Cheong Wa Dae on Wednesday dismissed the idea of pulling US troops out of South Korea following a peace treaty with North Korea, reiterating the need for a continued US military presence on the Korean Peninsula.

According to Cheong Wa Dae, President Moon Jae-in said the issue of US forces stationed in South Korea should only be determined through consultations with Washington, and was not dependent on whether there would be a peace treaty with North Korea.

“US troops in South Korea are a matter of the South Korea-US alliance. It has nothing to do with signing a peace treaty,” Moon was quoted as saying by presidential spokesperson Kim Eui-kyeom in a televised press briefing.

Prior to the briefing, Cheong Wa Dae said the presence of the US Forces Korea plays a crucial role in meditating military tension in Northeast Asia, one of the most volatile regions in the world littered with territorial disputes and historic animosities. 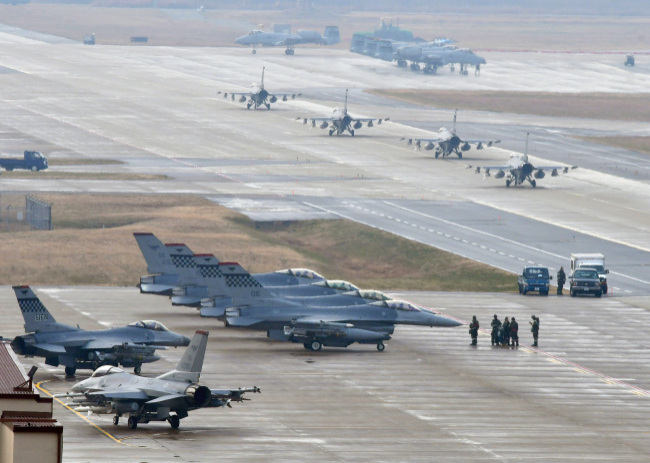 US warplanes on standby during the Vigilant Ace South Korea-US joint air drill held from Dec. 4 to Dec. 8. (Yonhap)
The remark follows presidential special adviser Moon Chung-in floating the possibility of withdrawing the 28,500-strong US forces stationed in South Korea in the event of a peace treaty being signed by the two Koreas.

In an article published in Foreign Affairs on Monday, special adviser Moon said if a peace treaty is signed, it will be “difficult to justify” continuing US military presence in South Korea.

“What will happen to US forces in South Korea if a peace treaty is signed? It will be difficult to justify their continuing presence. … There will be strong conservative opposition to the reduction and withdrawal of US forces, posing a major political dilemma for (President) Moon,” he wrote.

Fueling the controversy is the allegation that US President Donald Trump had considered a plan to withdraw all US troops from South Korea until it was scrapped following strong opposition from White House chief of staff John Kelly.

Citing a number of unidentified White House officials, US network NBC News reported Monday that Trump had “heated exchanges” over the issue with Kelly before the opening of the 2018 PyeongChang Winter Olympics in February.

Meanwhile, US Defense Secretary Jim Mattis hinted last week that the future of the USFK could be up for discussion -- an idea neither Seoul nor Washington deemed possible in the past -- should a peace treaty be signed.

“That’s part of the issues that we’ll be discussing in negotiations with our allies first, and of course with North Korea,” he said, responding to a question on if US will maintain military presence on the Korean Peninsula if a peace treaty is signed.

But Mattis appeared to take step back, saying, “I think for right now we just have to go along with the process, have the negotiations and not try to make preconditions or presumptions about how it’s going to go.” 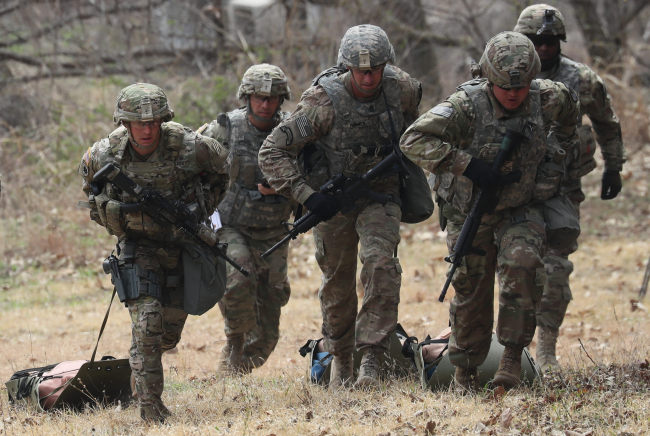 US soldiers conduct a joint training with South Korea's military. Yonhap
Security experts said that future US military presence in South Korea can only be adjusted through consultation with Washington -- regardless of whether there will be the signing of a peace treaty with North Korea.

Such an idea is well reflected in the mutual defense treaty between South Korea and the US adopted in October 1953, months after the US-led United Nations Command signed an armistice agreement with North Korea and China, an analyst said.

Under the mutual defense treaty, South Korea and the US are required to come to each other’s aid in the event of an armed attack in the Pacific area or any territories under both parties’ administrative control.

“The South Korea-US defense treaty is not solely designed to defend aggressions from North Korea,” said Shin Beom-chul, a senior fellow at the Asan Institute for Policy Studies, a Seoul-based research institute.

David Maxwell, a retired US Army Special Forces colonel and fellow at the Institute of Korean American Studies, agreed that withdrawal of the USFK would only be based on a decision by the allies’ governments and their security assessment.

In an interview with Voice of America, Maxwell noted there are other countries that have maintained US military presence even after the end of the war, such as Japan and some European countries following World War II and the Cold War, respectively.

The South Korean government said the USFK will assume a more important role when it comes to maintaining stability on the Korean Peninsula, particularly when there are serious discussions about declaring an end to the Korean War and signing a peace treaty.

“Maintaining peace on the Korean Peninsula will become more important than before. … In that regard, the roles of the South Korea-US alliance and the USFK will be crucial,” a senior official from the Unification Ministry told reporters under the condition of anonymity.

North Korea had long demanded the withdrawal of US troops from South Korea as a precondition for the North’s denuclearization, though there are speculations that Pyongyang has changed its stance lately.

After meeting with North Korea’s leader Kim Jong-un in March, South Korea’s national security advisor Chung Eui-yong said Kim did not raise the issue of USFK presence as a condition for nuclear dialogues.

During the meeting with the chiefs of media outlets last month, President Moon said North Korea did not demand the withdrawal of USFK as a security guarantee in return for giving up its nuclear arsenal.

“North Korea can demand South Korea reduce the deployment of US strategic assets, but I don’t think they will demand the withdrawal or drawdown of USFK,” said Cheong Seong-chang, a senior researcher at the Sejong Institute.