The Rodong Sinmun, the official newspaper of North Korea's Workers' Party, gave extensive coverage of Friday's inter-Korean summit, carrying as many as 61 photos of South Korean President Moon Jae-in meeting with the North's leader Kim Jong-un at the border peace village of Panmunjom.

In an unusual move, the daily newspaper published in Pyongyang filled four of its Saturday edition's six pages with news and photos related to the summit talks. It carried detailed reports of the entire summit outcomes, along with 61 photos.

On the top of the front page, the paper ran a photo of Moon and Kim shaking hands across the Military Demarcation Line at Panmunjom, saying Kim crossed the division line of the peace village to hold inter-Korean summit talks.

The Rodong Sinmun then filled the rest of the front page with various photos of the leaders inspecting South Korea's honor guard at the welcome ceremony and being greeted by accompanying officials from both sides. It said in a separate front-page story that Kim was warmly welcomed by Moon. 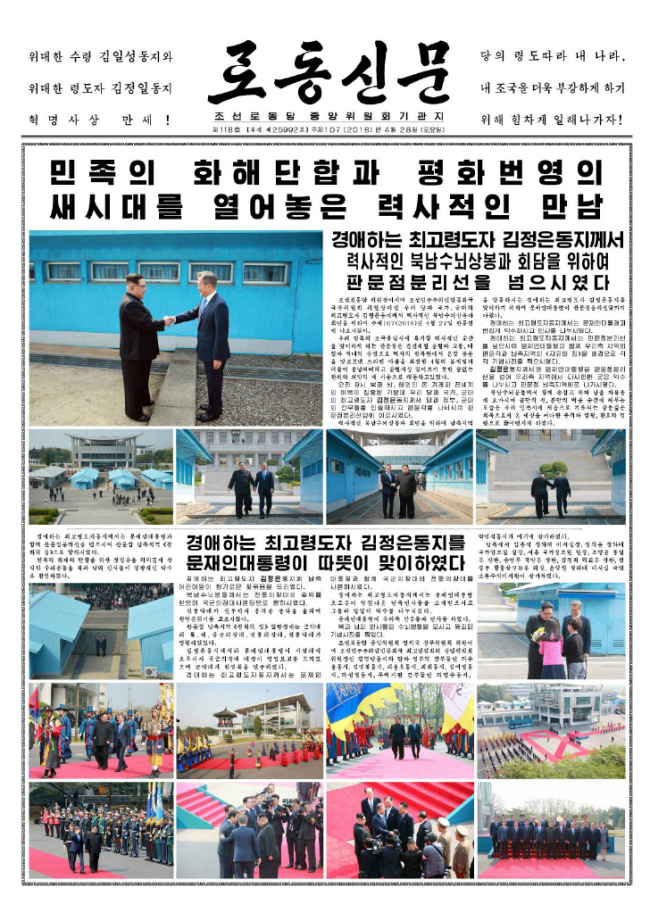 (Yonhap)
On the second page, the paper featured photos of the leaders jointly planting a commemorative tree and having a private conversation without the presence of an entourage at the Foot Bridge.

It carried the full text of the so-called Panmunjom Declaration on the third page, along with a photo of Moon and Kim hugging each other after signing the summit agreement. Noticeably, the two Koreas' agreement to push for the complete denuclearization of the Korean Peninsula was also included in the full text.

North Korea watchers say Pyongyang appears to have made public its intention for denuclearization at home and abroad by publishing the phrase of "complete denuclearization" in the official newspaper, which is also read by the North's residents.

The newspaper's fourth page featured stories and photos of the two leaders and their wives attending the dinner at Panmunjom and saying goodbye to each other.

Regarding the dinner, the newspaper said the South side prepared various meaningful foods and the North served cold noodles from Okryugwan, a famous restaurant in Pyongyang. (Yonhap)