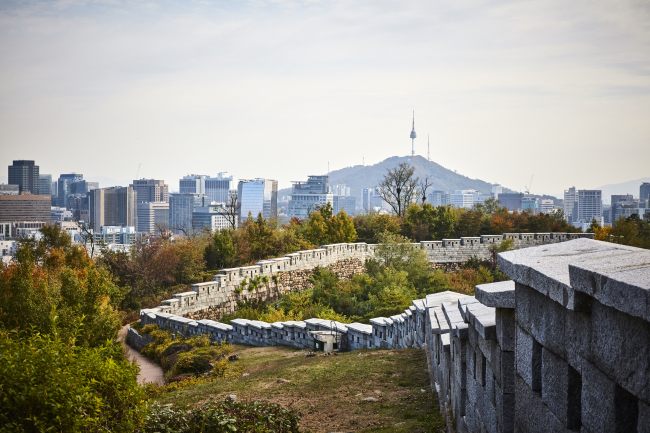 Part of the Seoul City Wall is located near Inwangsan in Sajik-dong, Jongno-gu, Seoul. Photo: Seoul Metropolitan Government
To complete the task in less than 100 days, some 197,400 laborers were mobilized for the construction using blocks of stone. Some decades later, another 320,000 workers were brought in to replace rammed-earth sections with stone blocks during the reigns of Sejong and Sukjong, according to the city’s data.

The wall remains a historical monument today, snaking around the modern metropolis that holds over half of the country’s 50 million population. It connects the four gates that face cardinal directions of the compass, known as the “Four Great Gates,” and four intermediate gates lying in between, called the “Four Small Gates.” Of the eight gates, it is at one of these small gates, Changuimun, or the small northwestern gate, that this reporter started walking.

Changuimun, situated in the northwest section of the wall, between Inwangsan and Baegaksan, is the only auxiliary gate that has maintained the shape of its original gate tower. The gate tower was destroyed in 1592 during the Japanese invasion and was reconstructed in 1741 under King Yeongjo of Joseon.

During the Japanese colonial rule between 1910 and 1945, parts of the wall were demolished to build roads and monuments.

Above the Changuimun gate meets Baegaksan and Inwangsan, which are rugged, rocky mountains. The trail runs from Changuimun to Hyehwamun, two of the Four Great Gates, and crosses Bugaksan.

Bugaksan was designated as the main mountain among the four inner mountains in Hanyang during the Joseon era.

It was not until 2007 that the area was reopened to the public after North Korean special agents broke into Seoul through the mountain in 1968, almost reaching the presidential Blue House. Public access was limited for about 40 years due to security reasons.

Originally designed for defense, the Seoul City Wall now offers panoramic views of the city and a look at its past and present, rising up along the slopes of the mountains.

In the eastern section of the Bugaksan area is Bukchon Hanok Village, located between Gyeongbokgung and Changdeokgung, two Joseon-era royal palaces.

The neighborhood used to be a residential area to royal family members as well as the families of high government officials during the Joseon era. Clusters of Korean traditional houses, or hanok, are well-preserved and the area has become a tourist destination.

The city is putting great efforts into restoring and preserving the wall to have it inscribed on the list of UNESCO World Heritage Sites. Last March, UNESCO rejected Seoul’s bid for the designation, citing that the structure lacked “outstanding universal value,” though it received a good evaluation for its authenticity and integrity.

The original shapes of gate towers and the city wall are intact, according to the city of Seoul, providing a clear example of the country’s traditional construction methods and style.

Seoul City aims to obtain World Heritage Site status for the wall in 2022. It is teaming up with new advisory panels to reassess the city wall’s significance.