[ The Korea Herald – Send E-mail ]
[Newsmaker] Professor accused of sexual assault sues alleged student victim for defamation
‘I was hospitalized in mental institution after being assaulted by the professor’: alleged victim
By Claire Lee
Published : Apr 23, 2018 - 18:15
Updated : Apr 23, 2018 - 18:25
A Dongduk Women’s University professor who has been accused of sexual assault has sued the alleged student victim for defamation, claiming that he will not tolerate another “mob justice” which he believes has been triggered by the ongoing #MeToo movement.

Ha Il-ji, 62, who is also an established novelist, offered to step down from his teaching post in March, after he was accused of allegedly making controversial remarks concerning the #MeToo campaign during one of his literature classes. The university did not immediately accept his resignation. Soon thereafter, one of his students anonymously accused Ha of kissing her without her consent in February 2016.

Ha has insisted that the kiss was consensual and therefore does not constitute a sexual assault. Claiming that the student has been spreading “false information” online, Ha sued the student for defamation. Under the South Korean law, a person who defames another person by disclosing false information can face up to five years in jail or a fine up to 10 million won. 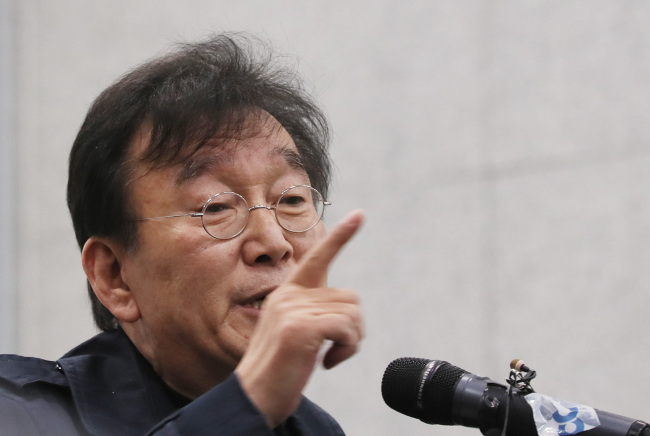 Professor Ha Il-ji. (Yonhap)
Even if the disclosed information is true, South Korea’s criminal code currently does not acknowledge truth as defense against defamation charges. This means even if the allegations against Ha are proven true, the student may still be criminally liable, according to a Gender Equality Ministry official. The Criminal Act states that a person who defames another by “publicly alleging facts” can face up to two years of imprisonment or a fine up to 5 million won ($4,700).

Women’s activists and several lawmakers have been fiercely criticizing the defamation law as one of the biggest challenges that sexual violence victims here face. They say the law discourages the victims from speaking out or even filing a legal complaint, as doing so always carries a risk of being sued or counter-sued by the perpetrator for defamation.

The alleged student victim told The Korea Herald that Ha is clearly taking advantage of what she thinks is a flawed law.

“I was speechless when I heard that he had sued me for defamation,” the student told The Korea Herald in a phone interview. “I think he had been worried that I would file a complaint against him, and suing me for defamation is his way of dealing with it. Even if I don’t get punished for ‘defamation,’ if I do file a complaint against him in the future, he can at least later claim in court that he genuinely believed that the kiss was consensual, and this ongoing defamation suit -- and that he sued me for publishing ‘false information’-- would become his evidence.”

The alleged victim claims she suffered a number of serious health issues since the alleged assault that took place in 2016, taking two years off from university as a result. She developed symptoms of alcohol-related dementia, she claimed. “As long as I drank, I would forget everything,” she told The Korea Herald. “I would even forget what happened before I started drinking on each day.”

She soon started cutting herself and abruptly gained 30 kilograms due to stress. “I was eventually hospitalized in a mental institution,” she said.

Ha has been telling the media that the student had “romantic feelings” for him, citing an e-mail that she sent to him in the past. In the e-mail, Ha claims, the alleged victim expressed her desire to stay with him in France -- where he was temporarily residing at the time.

The alleged victim told The Korea Herald that she wrote that e-mail in her desperate attempt to go back to university and finish her degree after her two-year leave of absence. Soon after the assault took place, the alleged victim said, she made countless phone calls to the professor while drunk at night, demanding his apology, leaving things on bad terms with him.

She said partly because of this, she was worried that Ha may grade her at a disadvantage once she goes back to school.

At the time, one of the only two professors grading assignments in her program was on leave, and there was no way to avoid Ha, she said.

“Professor Ha was going to be the one to grade my final project for graduation,” she told The Korea Herald. “I just wanted to be on good terms with a powerful figure both in my school and the literary world to avoid potential disadvantages.”

The student union of the Dongduk Women’s University said they will hold a meeting next Friday -- most universities are holding mid-term exams this week -- and issue a statement on professor Ha’s case soon thereafter.

The alleged victim said she is currently being supported by a number of women‘s rights organizations and has been speaking to law experts.

According to his students, Ha made controversial remarks over the #MeToo movement, claiming that one of the alleged victims of sexual violence made her public allegations against a powerful politician “because of her jealousy,” and she would not have accused him of rape had the alleged perpetrator offered to marry her.

Following mounting criticism from his students, Ha offered to resign from his post, but refused to apologize. A self-proclaimed feminist, Ha labeled himself a victim of the #MeToo movement, saying he had “the right to share his opinions freely” in his classes.

In March, actor and university professor Jo Min-ki was found dead after he was publicly accused of sexually assaulting at least eight women, mostly his former students. Some Koreans especially thereafter criticized the #MeToo movement as a “witch hunt” or “mob justice,” blaming it for the actor’s death.