A Korean remake of the popular US drama series “Suits” aims to focus on interpretation rather than imitation, making the series more relatable to a Korean audience.

The Wednesday-Thursday series on KBS2 revolves around the relationship between legendary lawyer Choi Kang-suk and rookie lawyer Go Yeon-woo, played by Jang Dong-gun and Park Hyung-sik, respectively. Choi hires Go as an associate lawyer, even though he isn’t qualified for the job, valuing his photographic memory. 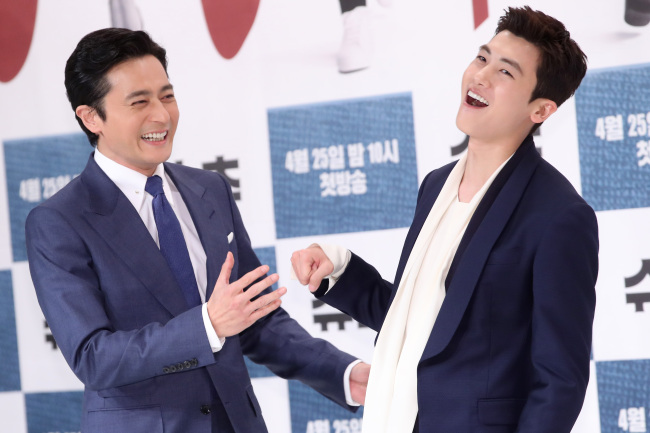 Jang Dong-gun (left) and Park Hyung-sik pose for photos at a media briefing held Monday at Times Square mall in Yeongdeungpo-gu, Seoul. (Yonhap)
“The drama is a character play. The series will be different from other Korean dramas, making the characters stand out,” director Kim Jin-woo said at a media briefing held Monday in western Seoul. “The episodes are focused on highlighting the characters’ charms.”

Despite a 20-year age difference, the two actors showed good chemistry, casually playing around at the briefing.

From the first meeting, the director was satisfied with the harmony between the two. He recounted, “I just looked at them and it looked great. From then, I was sure of my choice.”

Park, a 26-year-old singer-turned-actor who has mainly starred in romantic comedy dramas, was attracted by the relationship between the two male characters, after watching the original series.

“I was overwhelmed at first when cast for the role, due to the enormous amount of lines,” he said. “But the chemistry between the characters and the catchy lines attracted me.”

While the original show is currently in its seventh season, Jang stopped watching the first season, worried he might unconsciously copy the “exceptionally charming” character.

“Suits” marks the 46-year-old actor’s return to the small screen after a six-year break. He explained his choice of work, saying, “As my recent work has been dark and sad, I wanted to do something light.”

While some doubt whether the remade series will be able to capture the wit of the original, the director displayed his confidence.

“We hope to interpret, not to imitate. If it’s too Korean, the original charms might fade away and if we just mimic the original work, it might not suit us. We are working on finding the right level,” the director said. “I am curious what viewers will think of the drama.”

The first episode of the 16-part legal drama is set to air Wednesday at 10 p.m. on KBS2.