Through the armistice agreement, the participants agreed to ensure cessation of hostilities and all acts of armed force until a peaceful settlement was achieved. South Korea was not a direct signatory to the agreement as President Rhee Syngman refused to sign it.

Boosted by the prospects for the April 27 inter-Korean summit and the subsequent US-North Korea summit, the two Koreas are seeking to use the meetings as an opportunity to declare an end to the Korean War and replace the armistice agreement with a peace treaty.

“It is one of the ways under consideration to change the security climate on the Korean Peninsula into a more peaceful one,” a senior Cheong Wa Dae official told reporters under the condition of anonymity.

The Moon Jae-in administration is considering putting such ideas into the joint statement to be issued following the summit with North Korea’s leader Kim Jong-un, who expressed willingness to abandon its nuclear arsenal in return for security guarantees for the regime. 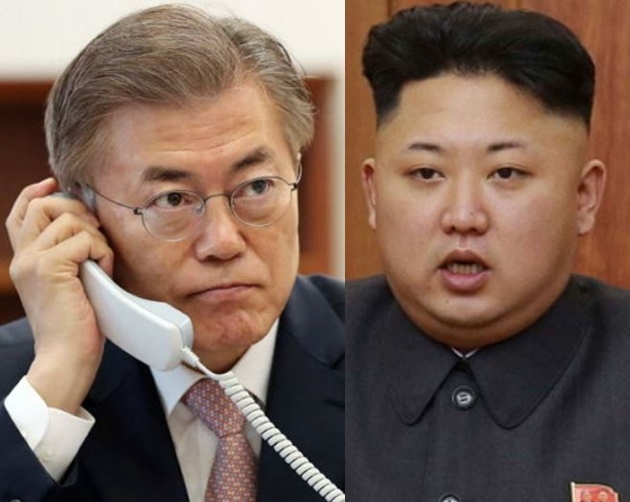 South Korean President Moon Jae-in, left, and North Korean leader Kim Jong-un (Yonhap)
Declaring an end to the Korean War, however, would involve discussions beyond the two Koreas, experts said, as the armistice agreement is a multilateral treaty and replacing it with a peace treaty would require the consent of other signatories.

Mindful of the restrictions, the Cheong Wa Dae official said the process would require three- or four-way consultations, involving the US and China. The statement might adopt a more “flexible” language than a specific one, the official added.

“I’m not sure we would use the phrase ‘end of war,’” the official said. “Given that there is reservation about whether the two Koreas’ agreement is enough to replace the armistice agreement with a peace treaty, the three-way or even four-way talks is possible if necessary.”

The efforts toward a peace treaty seem to have support from the US, which North Korea has long insisted as its counterpart in negotiating a peace treaty. Under the flag of the United Nations Command, the US fought against the North Korean and the Chinese Armies during the Korean War.

During a meeting with Japanese Prime Minister Shinzo Abe Tuesday, Trump said he had given his “blessing” to the efforts to conclude the Korean War provided that North Korea agreed to abandon its nuclear weapons.

Until now, there has been no response from North Korea via its state media. The Chinese government, whose leader Xi Jinping recently met Kim Jong-un in Beijing and who is reported to be considering a visit to Pyongyang soon, has similarly not made any public response.

“Theoretically, the armistice agreement is not something that the two Koreas can change,” said former unification minister Lee Jong-seok, who accompanied former President Kim Dae-jung to Pyongyang for the first-ever inter-Korean summit in 2000.

“It needs further analysis to figure out what Trump means and whether he wants us to float the idea first before declaring the end of the war himself during the summit,” said Lee, who is now advising President Moon Jae-in on the inter-Korean summit.

Regardless of whether there will be an official declaration concerning the end of the Korean War, speculation is rampant that the summit will result in adopting a series of measures aimed at easing military tensions on the Korean Peninsula.

Among the measures being raised is returning the demilitarized zone to its original state by pulling back guard posts from the heavily-fortified border area, where the two Koreas have exchanged fire and planted land mines during the decadesold armistice.

Cheong Wa Dae said such ideas would be echoed by North Korea as its leader Kim Jong-un gave assurance to the South Korean special envoys last month that Pyongyang has no intention to take any military action against Seoul.

“Whatever form it might take, we sincerely hope that the two Koreas agree on measures to reduce hostilities… Actually, our expectations have grown more because leader Kim Jong-un said he won’t take any military action against South Korea,” the Cheong Wa Dae official said.

It is not the first time that the two Koreas have seriously discussed a peace treaty. Following the end of the Cold War, the two sides agreed in 1992 to work together to transform “the present state of armistice into a solid state of peace.”

The most recent discussion came after the second inter-Korean summit in 2007, which concluded with the commitment to work together with three or four parties – including the US and China -- to discuss declaration of the end of the Korean War.

However, the agreement was never fulfilled as the conservative Lee Myung-bak administration adopted a hawkish position on North Korea, which responded with nuclear tests, missile lunches and attacks on civilians and the military.

“I think the current idea is similar to the 2007 summit model…If we manage to declare an end to the Korean War, it would be more of a political move than a legal action,” said Shin Beom-chul, a senior fellow at the Asan Institute for Policy Studies.