[ The Korea Herald – Send E-mail ]
After four years, Korean government holds first memorial for Sewol ferry disaster
By Claire Lee
Published : Apr 16, 2018 - 17:31
Updated : Apr 17, 2018 - 08:52
Some 5,000 Koreans gathered in the city of Ansan for the government’s first memorial remembering victims of the 2014 Sewol ferry disaster on Monday, which marked the fourth anniversary of one of the country’s worst maritime disasters that claimed the lives of more than 300 people.

Ansan in Gyeonggi Province is where the vast majority of the victims -- high school students who were on a school trip to Jeju Island -- lived. Most of them were second-year students at Danwon High School located in the city.

“Many say time will make things better, but I feel like such sayings are all lies. (Four years have gone by and) I‘m still not okay. I’m still not ready to let you go,” Nam Seo-hyeon, an older sister of the late Nam Ji-hyeon, one of the many Danwon High School students who lost their lives in the disaster, said in her open letter to her sister.

“For the past four years, my entire world was about you. I miss you so much, sister. I promise I’ll live a life that will make you proud. I love you so, so much.” 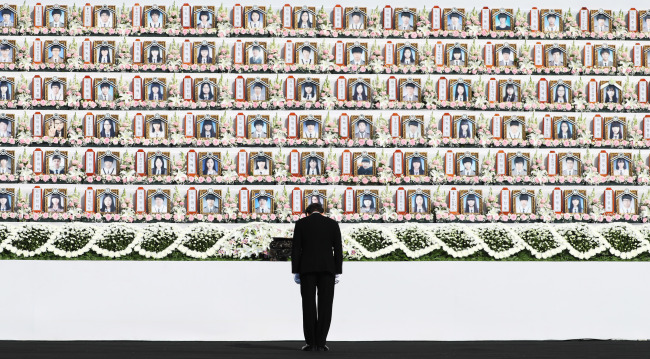 Prime Minister Lee Nak-yon attends the memorial for the Sewol ferry disaster in Ansan, Gyeonggi Province, Monday. (Yonhap)
President Moon Jae-in, who did not attend the event, pledged Sunday to fully “uncover the truth” of the disaster. Moon said the search for the remains of five victims who are still missing will resume once the wreck of the ferry is erected upright in May. The 6,825-ton ferry was raised last year and currently lies on its side at the port of Mokpo, near Jindo, near where the ferry sank.

“We have changed after the Sewol tragedy,” Moon wrote in a Facebook post that he uploaded on the eve of the anniversary. “I will make my best effort to make sure that the life of every citizen is regarded as the foremost value.”

Also absent were the leaders of the main opposition Liberty Korea Party, which was in power when the ferry disaster occurred during ousted President Park Geun-hye’s administration. The Park administration never hosted a memorial for the Sewol disaster victims.

“We attend this ceremony as a way to show our determination to not give up until the truth is finally discovered,” said a group of victims’ families in a statement.

“We hope this memorial can be a beginning of a world where all citizen’s lives are valued and safety is secured.”

A total of 110 letters, many of them heartbreaking, written by the parents of the schoolchildren victims, were also published both online (www.416letter.com) and in print in commemoration of the anniversary.

“I’m sorry that I eat, laugh and cry and pursue everyday life without you,” wrote a mother to her late daughter, Da-hye.

“I’m sorry I failed to protect you. I’m sorry I‘m alive without you. I don’t deserve to be your mother. I'm sorry. I'm so sorry my baby.”

Another mother, who lost her son Yeong-seok, writes that she still pays his phone bills because she wants to keep his number -- although he can no longer answer her calls.

“I haven‘t even filed your death certificate yet. I still don't know how to say good-bye.”

The ferry disaster triggered massive public outcry back in 2014, and the way it is remembered still remains highly politicized -- and divided.

For example, during the PyeongChang Winter Games, Kim A-lang, a member of Korea’s short track skating team, became a target of online bullying by conservative extremists for wearing a yellow-ribbon sticker honoring the victims of the Sewol tragedy.

In 2014, young supporters of former President Park made headlines for staging a strike by binge-eating in front of bereaved families of the Sewol disaster, who were on a hunger strike in protest of the government at the time.

Liberals say that the Park government was largely responsible for the disaster, while supporters of Park, along with ultraconservatives, argue that that the incident was nothing more than a “traffic incident.”

Although a 2014 probe concluded that the sinking of the ferry was caused by a combination of an illegal redesign of the ferry and cargo overloading, among other reasons, Moon announced Sunday that a special inquiry team will continue reinvestigating the cause of the disaster thoroughly.

Moon’s comments were made about four months after the National Assembly passed a special law on reinvestigations of the Sewol disaster in November.

In March, prosecutors indicted three former aides to former President Park, including Cho Yoon-sun, a former presidential secretary for political affairs, for allegedly setting up a response system to prevent the 2014 special probe committee into the Sewol disaster from making a “decision unfavorable” to the Park administration at the time.

It was also in March when the prosecution concluded that former President Park spent crucial time in the morning of the disaster in her bedroom. Prosecutors believe that her aides at the time, including former chief of staff Kim Ki-choon, fabricated the time she was first informed of the disaster, as part of efforts to conceal her slow response to the disaster.

President Moon also revealed his plan to build a memorial park in Ansan’s Hwarang Recreation Area -- a public park space that is popular among residents. The decision, however, has been protested by some residents in the region, who have been saying that the memorial park should be built elsewhere in Ansan, as they do not want to be “reminded of such a tragic event” at a public space meant for recreation and fun.

But Nam Seo-hyeon, who lost her baby sister to the disaster, was more than determined to see the memorial at the public recreation site.

Also on Monday, a joint funeral for 11 victims of the Sewol disaster, who are among the 43 adult victims, was held in the northwestern port city of Incheon.

”Thank you for giving mom and dad so many wonderful friends,” said Nam to her late sister, referring to other family members of victims with whom her family has been working in solidarity.

“Thank you for giving me so many brothers and sisters in the name of the ferry Sewol. Because I‘m with them, I can continue fighting for you.”