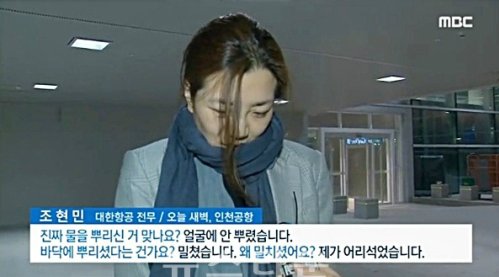 (A screen capture from MBC news)
According to Korean Air, the company has appointed lawyer Kim Sang-hyuk from the law firm Sejong to “cooperate with the police probe that is currently under way.”

“We want to truly apologize for what went wrong. We will not only take legal responsibility regarding the case, but also take social and moral responsibility by considering Cho’s resignation from the management,” the company said.

Korean Air said Cho would be excluded from the management position from Monday until the police investigation is completed. It added that it would take “appropriate measures” following the police probe.

Dealing with yet another controversy surrounding its owner family, the company added that it would now only be talking through the legal representative regarding the case.

On Monday, they summoned a number of Korean Air officials and employees of the advertising agency who were reportedly present at the meeting in question. The officials reportedly showed a passive attitude and were hesitant to testify about the case.

Details, such as the direction in which Cho allegedly threw or pushed the cup of water, will help determine whether her action amounts to assault, according to police.

Amid rising public criticism against the alleged assault and follow-up claims of Cho’s outbursts at her employees, the heiress to the country’s largest airline returned from her vacation in Vietnam early Sunday.

Later in the day, Cho sent out a mass email to Korean Air employees, apologizing for losing her temper “as she was too focused and passionate about her work.”

The controversy has hit the airline, which is scurrying to minimize the fallout. As of Monday, the stock price of the firm slipped 2.5 percent from the previous trading day. On Friday, a day after the incident first surfaced online, the company’s share price plunged more than 6 percent, while its affiliate Jin Air also slipped 4 percent.

Meanwhile, Korean Air Line’s labor unions have begun calling on Cho to step down from management.

Korean Air’s employee union and two unions of pilots said in a joint statement Sunday that Cho’s actions harmed the reputation of Korean Air, demanding her to step down and offer a sincere apology to all employees and the public.

Cho is the youngest daughter of Korean Air Lines CEO Cho Yang-ho, who is also a chairman of Hanjin Group. Cho’s older sister, Cho Hyun-ah, was jailed in 2014 over the infamous “nut rage” incident for ordering an aircraft to return to the gate because she was unhappy with the way a cabin crew had served her nuts.