Skepticism lingers over the role and authenticity of Korean shamans who are known to harness their powers from nature. They allegedly interact with the dead, communicate with the spirit world and allocate the mysterious energies into the human world.

Korean mudang also perform a ritual dance called “gut” to dispel evil spirits. Embattled individuals visit shamans to recharge some positive energy or get a glimpse into their own future. Both gut and fortune-telling are available for fees, and pricing is different from mudang to mudang.

With a bright smile plastered on her face, model-turned-mudang Pang welcomed her clients from Seoul. Having opened her mudang practice in Ilsan a few years ago, Pang said that one of the greatest pleasures of her job is meeting people from all walks of life.

Shortly after when she excused herself to finish a consultation, this reporter quickly checked out her living room. Small details of her house came into focus. Occupied by a large white leather sofa, her spacious living room felt inviting. The marble coffee table in the center was lined with a neatly stacked pile of books. Self-portraits from her modeling days adorned the walls. 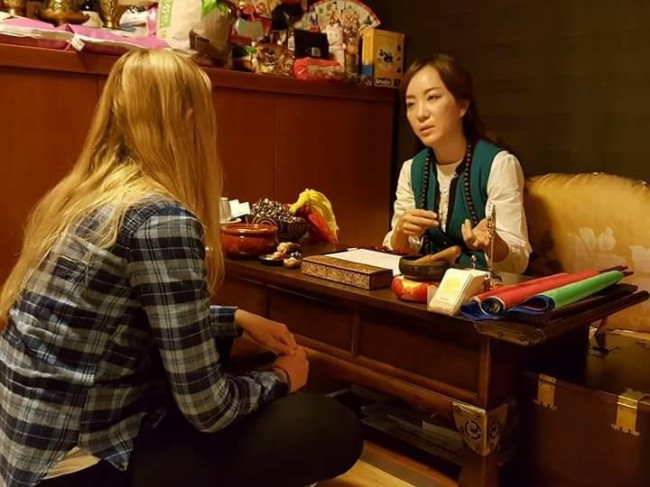 Korean mudang Pang Eun-mi offers consultation to her client at her house in Ilsan. (Photo courtesy of Pang Eun-mi)
After nearly thirty minutes, Pang came out of the consultation room. She wore puffy pants, a top and her long hair was neatly tied back. Her outward appearance did not give off spiritual vibes. However, her daily schedule often involves performing gut, a tricky act aimed at guiding people to the “right path or answer.”

To many Koreans, shamanism triggers conflicting views and attitudes. While some consider shamanism to be a religion, others label it as either a superstition or merely a relic of the past.

It is hardly surprising that mudang themselves cherish their time-honored practice and belief. Some Koreans still go for mudang’s service to fight their personal problems, recognizing their spiritual powers.

Korean studies scholars, meanwhile, have long been studying mudang and gut as part of Korea’s traditional culture, offering a way to reconcile the longstanding stigma and the historical significance of mudang. But media reports still tend to portray mudang and shamanism in a negative fashion. 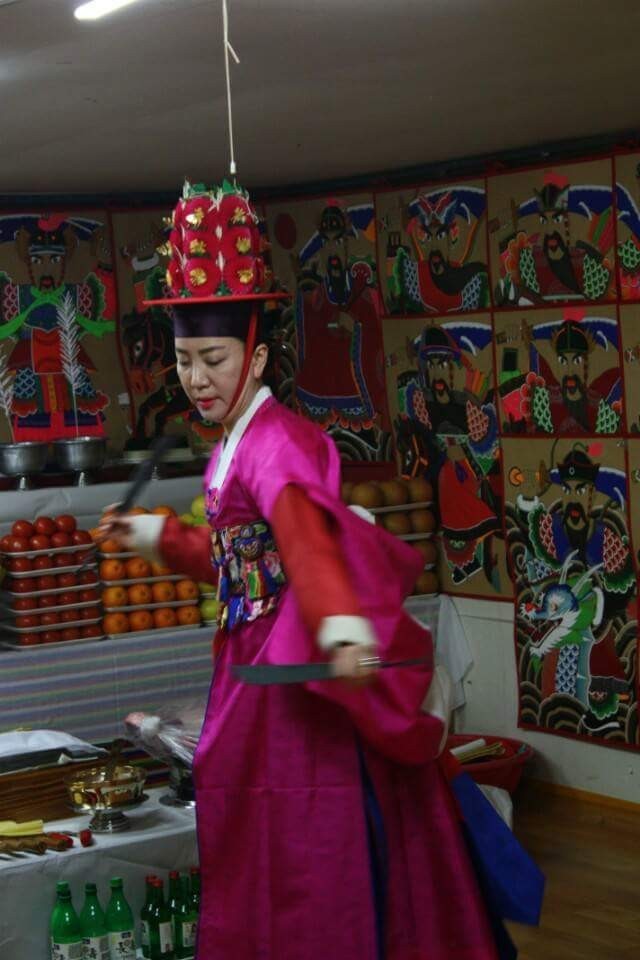 Nevertheless, there is no shortage of clients from both Korea and elsewhere, seeking guidance from Pang and asking for some answers to their “unsolvable problems.”

The following is the excerpts of a recent interview with Pang:

The Korea Herald: Please give us a brief introduction of yourself.

Pang Eun-mi: Currently, I guess I can say that I am “out of a job.” I have been living as a mudang for 13 years now. But, prior to my life as a mudang, I held various job titles and worked in almost any place you could imagine, ranging from modeling (for three years in the early 1990s) to cooking staff at a pizza joint. Because I kept getting sick, and seeing and hearing weird sounds, I firmly believed that living as a shaman was meant to be.

KH: How was your family’s initial reaction to your decision?

Pang: Obviously, I could not let my father know that I needed 10 million won ($9,500) to undergo the shamanic calling, which is conducted to initiate a person into shamanship. I did not have that kind of money at the time. So, I told him that I was trying to open up an institute teaching philosophy.

Because my mother was the one who took me to see a shaman for my illness, she was always my No. 1 supporter. My son was too young at the time, but now he boasts to friends that his mom is a mudang.

KH: Please describe the time of your shamanic illness and calling.

Pang: When my son just turned 1 year old, I underwent the mudang initiation ceremony. Prior to the ceremony, I only recall falling very ill to the brink of death. I was 26 when I first showed symptoms of what we call “shamanic illness” or “shamanic crisis.” I first started to experience facial paralysis.

Every night was filled with terrifying visions and even visits from the spirits. I tried both traditional Korean and Western medicine, but doctors failed to diagnose my illness. After four months of visiting doctors for their consultations, my mother took me to a local mudang house.

At the time, I thought only psychologically weak people visited the mudang. With just one glance at me, the mudang said, “You need to accept your calling or else you are going to die.” Despite concerns about my future and negative perceptions, I accepted the calling and consequently got cured of my illness.

KH: Tell us about the time when you pointed out the murder suspect in a large crowd.

Pang: I was only 6 when my mother took me to the local food market. Curious bystanders gathered around the police force blocking the murder scene, which was a house where a little girl died. I could not speak clear, full sentences because I was so young, but apparently everyone saw me point the finger at the murder suspect and say, “It’s her.” Police launched an investigation and discovered that it really was the stepmother who was responsible for the girl’s death.

KH: How many clients do you receive per day on the average?

Pang: It is different every day, but on a busy day, I tend to get around six to seven clients. Reading client’s fate takes about an hour or so. When I feel that my energy has been depleted, I take off to the mountains frequently to replenish. I also sometimes get invited to lead programs at the Asia Institute. 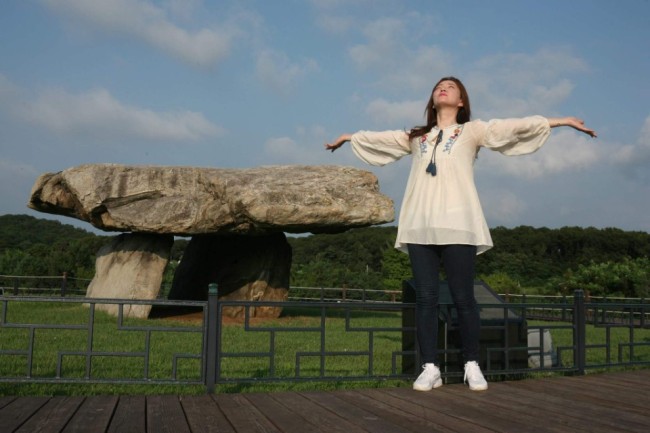 Pang Eun-mi communicates with nature’s spiritual world at the Ganghwa Dolmen Heritage Site in Ganghwa-gun, Incheon. (Photo courtesy of Pang Eun-mi)
KH: What was the most meaningful case?

Pang: Off the top of my head, it would probably be the American college exchange student. With a glance at his destiny, I told him: “You will be given the opportunity to remain in Korea within two months. Be patient.” The client looked at me in disbelief and said, “How did you know I was worrying about my expired visa. I want to stay in Korea but my exchange program ended.” The student told me two months later that he was offered a job.

KH: What do you make of the stigmatization of shamans in Korea?

Pang: I think it’s an ongoing battle for shamans to live in confidence. Even I, who became a shaman, was ashamed of myself leading up to the calling ceremony. People would always deem shamans as “different” or “weird” along with a negative perception.

That is why I never openly practiced shamanism by displaying a flag for advertisement purposes. Word got out that I was good at my practice, but I continued to take in clients for four years in secrecy.

It was not difficult for me until my little boy grew older. When his teachers sent home a parental information sheet, I hesitated to write “mudang” as my profession. I was worried about the potential damage it would have on not only my son, but also my family as a whole.

What I really did not understand were those clients, who came by my house for consultation, would treat me like a stranger on the streets. 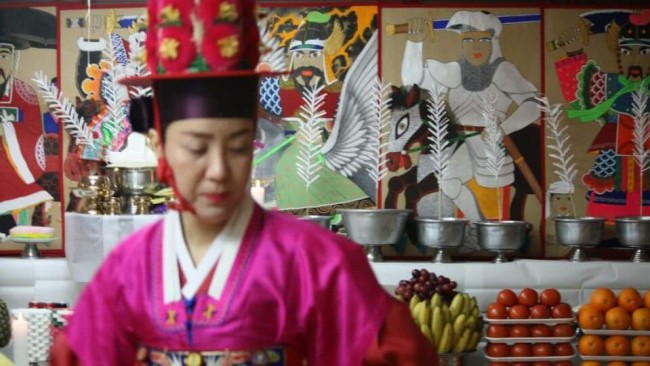 Korean mudang Pang Eun-mi (Photo courtesy of Pang Eun-mi)
KH: What do you see in the next five, 10 years from now?

Pang: Within two to three years, my goal is to continue living my life as a shaman despite the difficulties and negative perceptions. Eradicating stigma all together will be indeed difficult. I believe it is critical for shamans to change perspectives on the “way of life,” essentially how they follow through in life principles. There are some 300,000 shamans in Korea.

Compared to shamans around the world, I believe Korean shamans have been given the most powerful ability to communicate with the spirits.
My long-term goal is to raise the awareness about Korean shamanism, culture and history and expand my pool of clients, helping those in need the most. Because I consider shamanism to lie at the core of Korean culture and history, I hope to launch an inter-cultural dialogue and reach out to the global community.