[ The Korea Herald – Send E-mail ]
Korea to seek trade diversification from US, China
By Shin Ji-hye
Published : Apr 5, 2018 - 15:49
Updated : Apr 5, 2018 - 16:17
South Korea aims to become the world’s fourth-largest exporter by 2022 with a new trade strategy to diversify its export destinations beyond the US and China, join the Trans-Pacific Partnership and foster digital trade, according to the government on Thursday.

Under the government’s new trade strategy, Korea aims to reach around $790 billion in export volume in four years to become the fourth-largest exporter following China, the US and Germany, and overtaking Japan.

Last year, Korea ranked sixth in export volume with $573.7 billion, following China, the US, Germany, Japan and the Netherlands.

Korea could reach the goal if it is able to raise annual export growth to 6.6 percent from 5.9 percent, which was the annual average growth since 2010, the government said. Japan’s export volume has grown 2.3 percent during the period.

To achieve the target, Korea will reduce its reliance on its two main export destinations, the US and China, and diversify its markets to Eurasia, ASEAN and India, according to the Ministry of Trade, Industry and Energy. 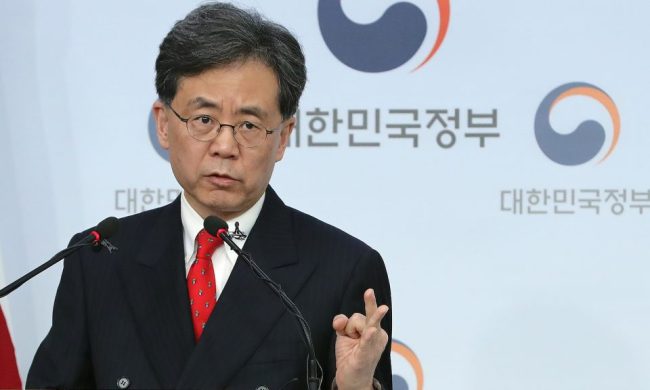 South Korean Trade Minister Kim Hyun-chong (AFP-Yonhap)
Combined exports to the US and China accounted for 37 percent of Korea’s total exports last year, but trade risks have been growing recently due to growing protectionism and political issues.

Korea will instead push free trade deals with the Eurasian Economic Union, including Russia, Kazakhstan, Belarus, Armenia and Kirgiz, to strengthen partnerships mainly in the shipbuilding and port areas. It will also target ASEAN and India, using the Regional Comprehensive Economic Partnership and free trade deals.

The government also said it would move to join the Comprehensive and Progressive Agreement for Trans-Pacific Partnership, which now has 11 members, including Australia, Brunei and Canada, after the US left last year.

“We will reach an agreement among ministries about whether to join the CPTPP by the first half of this year,” said Trade Minister Kim Hyun-chong.

“If the US returns to the CPTPP, Korea will also join in time by cooperating with the US,” Kim said.

Under the new trade strategy, the government will also map out a digital trade plan to respond to the upcoming “fourth industrial revolution” in which artificial intelligence, big data and fifth-generation network technologies will lead future industries.

The government plans to create a new trade consultative body with other nations to discuss data trade issues and set rules for e-commerce and digital trade technologies.