Shipments of Korean makeup products to China reached $1.56 billion in 2016 compared to $300 million in 2013, according to data by the Korea Cosmetic Association. 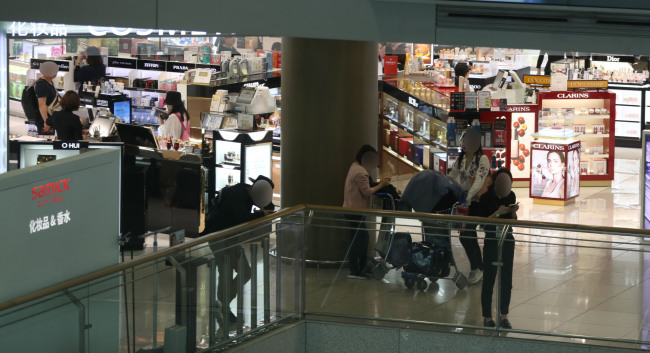 South Korea has insisted that the missile system is to counter threats from North Korea, but China has been strongly opposed to THAAD.

Chinese State Councilor Yang Jiechi, meanwhile, told President Moon Jae-in last month that there will be "tangible results in the near future" after Moon requested that China terminate measures seen as retaliation for the THAAD deployment.

"We expect a rebound in sales to some extent at duty free shops and department stores if the number of Chinese tourists increases," an official of South Korea's second-largest cosmetics maker Amorepacific said. "We are forecasting improvement in sales this year due in part to the low base effect last year."

The outlets are the first of their kind to market the three brands in China, although the makeup company operates 182 and 58 stores for high-end skin care lineups Whoo and Sum, respectively, in China. The Whoo shops were launched in China in 2006, and the Sum branches opened last year.

Tonymoly Co., South Korea's sixth-largest cosmetic brand, said it will launch an aggressive marketing campaign in China this year, noting that it signed a contract for the provision of its products in quantity to DMX, a Chinese firm specializing in the distribution of cosmetics, late last year.

"We've not yet seen any recovery in sales," an Able C&C official said. "We are not sure if Chinese tourists will come again and have a positive impact on sales after the lifting of sanctions."(Yonhap)