Local lenders are expected to tighten their guidelines on household loans in the second quarter of this year amid government-led measures to control the overheated real estate market, central bank data showed Thursday.

The overall index measuring banks' "attitude" toward extending loans to households came to minus seven for the April-June period, compared with minus 10 a quarter earlier, according to data by the Bank of Korea.

A reading below zero means banks will implement tougher screening for household loans, while a reading above zero means eased lending requirements. 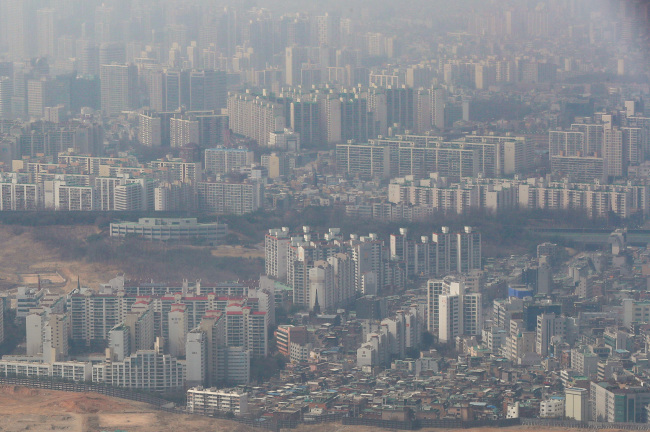 (Yonhap)
The quarterly reading was based on a survey of 15 banks and 184 nonbank lenders between Feb. 23 and March 9.

The BOK said demand for fresh mortgages is likely to reach minus 30 in the second quarter in the face of government-led financial regulations.

The new debt service ratio rules will go into effect in the latter half of this year after a trial period of several months. Under the tightened DSR guidelines, lenders will check borrower's monthly debt obligations that include overdraft bank accounts and credit card loans, making it harder for people to take out fresh loans.

As of the end of December, the country's overall household debt came to more than 1,450 trillion won ($1.32 trillion).

The BOK data also showed that local lenders' attitude toward fresh loans to big firms came to minus three in the second quarter, while the attitude toward small and mid-sized companies worsened to minus 10 for the three-month period.