South Korean and US marines have called off a massive combined amphibious landing exercise this week due to adverse weather, the combined command announced Wednesday.

They had planned to stage the so-called D-Day landing operation, reminiscent of the Invasion of Normandy, on a beach of the southern coastal city of Pohang on Thursday. 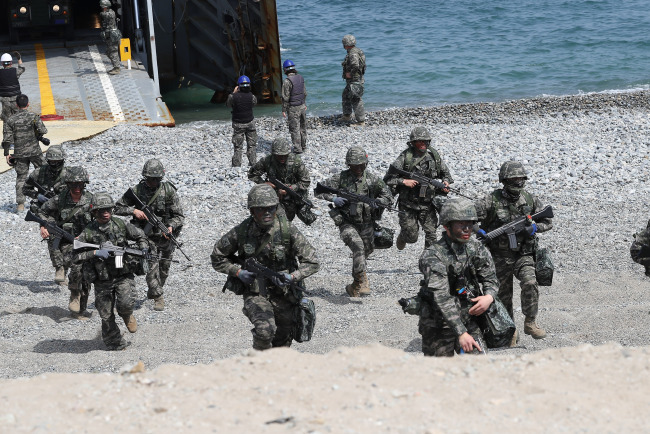 (Yonhap)
It was canceled "after weather assessments indicated unsafe landing conditions for service members," the Combined Forces Command said in a press statement. "Participating units in the air and sea portions will continue training as planned."

The CFC chief Gen. Vincent K. Brooks said it was a "good call by the on-scene commanders, who must balance readiness and risk -- even in a training environment." He doubles as commander of the 28,500-strong U.S. Forces Korea.

The marines kicked off the weeklong Ssangyong, or Twin Dragon, drills on Sunday in connection with the annual Foal Eagle field training between the allies.

Among the US assets mobilized are the USS Wasp, a 40,500-ton multipurpose amphibious assault ship, and the USS Bonhomme Richard, another vessel of the same class. Wasp is carrying several F-35B stealth fighter jets capable of vertical take-off and landing.

The number of participating troops has not been announced. The Ssangyong practice is held annually, but it is conducted on a larger scale every two years, involving more than 10,000 American marines, mostly based in Okinawa, and thousands of South Korean marines.

Ssangyong is designed to build and maintain fundamental military readiness throughout the alliance, according to the CFC.

The two sides usually make public some elements of the Ssangyong training, but this year they are not allowing media coverage, apparently mindful of a nascent mood for peace on the peninsula.

Meanwhile, a top US naval commander inspected the USS Wasp earlier this week.

"The F-35B is a game-changer, not only for the Navy-Marine Corps team, but for the way we operate here in 7th Fleet," Vice Adm. Phil Sawyer, commander of the US fleet based in Asia, said during the visit, according to its website. (Yonhap)