Park fell to Pernilla Lindberg of Sweden on the eighth playoff hole at Dinah Shore Tournament Course at Mission Hills Country Club in Rancho Mirage, California, on Monday (local time). The sudden-death showdown was contested over two days because Park and Lindberg remained deadlocked after four playoff holes on Sunday and play was suspended due to darkness.

Lindberg clinched her first professional victory by draining a 25-foot birdie putt at the par-four 10th, after both players had pars at each of the first three playoff holes. Park had a chance to match that birdie, but her 15-foot putt ended up just inches shy of the cup.

After the close call, Park still gave herself a pat on the back for putting up a good fight.

"I am a little disappointed but really happy with the way I played this week," Park said. "I didn't make a lot of mistakes in the playoff. But the morning greens were a little bit slower than I anticipated, I hit a couple putts short." 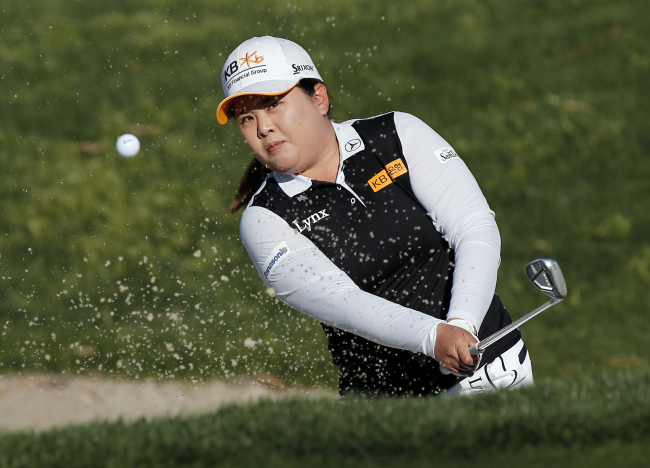 Park In-bee of South Korea hits a bunker shot at the sixth playoff hole against Pernilla Lindberg of Sweden at the ANA Inspiration at Dinah Shore Tournament Course at Mission Hills Country Club in Rancho Mirage, California, on April 2. (AP-Yonhap)
Park now has three wins and four losses in LPGA playoffs over her career. She was in pursuit of her eighth career major championship and her first since the Ricoh Women's British Open title in August 2015. She was also going for her second victory in four starts this year, after missing the latter part of the 2017 season with back problems.

The LPGA Hall of Famer earned $223,635 for her effort and jumped to the top of the money list this season with $480,221. Park also climbed six spots in the latest world rankings to reach No. 3, the highest position among South Korean players.

The two players resumed the playoff at the par-four 10th. Park put her second shot several feet closer to the cup than Lindberg but left her birdie attempt about a foot short after Lindberg missed her putt by just inches.

Then at the par-three 17th, both missed the green off the tee -- with Park finding a greenside bunker and Lindberg landing in thick rough just shy of the same bunker.

Park hit her next shot well past the hole, while Lindberg put her chip shot a couple of feet closer to the hole.

Park sank her par putt to put pressure on Lindberg, who calmly drained her own par attempt to extend the playoff. 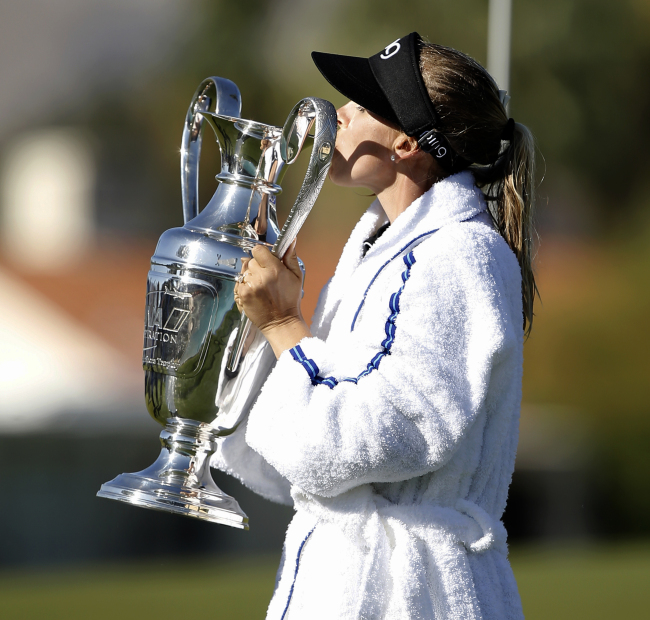 Pernilla Lindberg of Sweden celebrates her first professional victory on April 2. (Yonhap)
They returned to the par-five 18th, the same hole they'd played four times on Sunday without resolving the deadlock. Lindberg had a chance to finish after reaching the green in two and hitting her first putt to about five feet from the cup. Park, putting for birdie from a couple of feet away, left her attempt short, and Lindberg missed hers well to the right.

Back at the 10th hole, both players reached the green in two, with Lindberg farther away from the cup. But the Swede stepped up and rammed home her lengthy putt.

Park failed to extend the playoff as she once again left her putt short, but she didn't forget to give credit where it was due.

"The putt Pernilla made on the last (hole) was a champion's putt," Park said. "You really can't beat that. Congratulations to her." (Yonhap)