Park and Pernilla Lindberg remained tied after four playoff holes at the ANA Inspiration at Dinah Shore Tournament Course at Mission Hills Country Club in Rancho Mirage, California, on Sunday (local time), before play was suspended due to darkness.

The sudden-death competition will resume at 8 a.m. Monday local time, or midnight Monday in South Korea.

Park is in pursuit of her eighth career LPGA major and her second win in three weeks this season.  Park's last major victory came at the Ricoh Women's British Open in August 2015.

She and Lindberg will tee off at the 10th hole to resume their playoff. If they are still tied after that, they will go to 17th and then the 18th, if necessary. 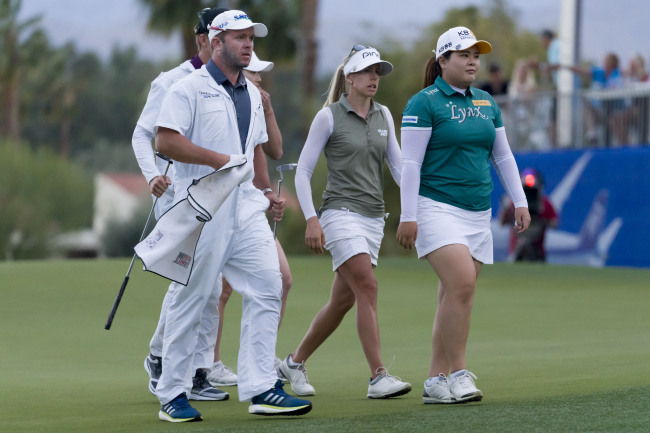 Park In-bee of South Korea, far right, at the Inspiration on the LPGA Tour at Dinah Shore Tournament Course at Mission Hills Country Club in Rancho Mirage, California, on April 1. (Yonhap)
Park, Lindberg and Jennifer Song ended the regulation tied at 15-under 273. All three had pars on their first two trips to the 18th hole during the playoff. Then in the third go-round, Song blinked first and was knocked out of contention with a par, while Park and Lindberg both had birdies.

Park and Linberg had pars on their fourth trip to the 18th, while playing with the aid of extra lighting devices in the dusk.

Park shot a five-under 67 in the final round, and closed her round with two straight birdies. Song, born to Korean parents in Michigan, carded a bogey-free 67 on Sunday to set up the playoff.

Linberg was the overnight leader at 14-under and shot a 71 to fall into the playoff.

Park won this major tournament in 2013, when it was called the Kraft Nabisco Championship.

Park began the round four strokes behind Lindberg at 10-under. But a birdie at the seventh, her third of the day, elevated Park to the top of the topsy-turvy leaderboard at 13-under, with Jessica Korda and Caroline Masson.

Song, Lindberg, and the Jutanugarn sisters -- Ariya and Moriya -- were also in the mix. At one point late in the round, Moriya Jutanugarn, Song and Linberg were tied at the top, with five others just one stroke back.

Park birdied the 13th and 14th to reach 14-under, tied for first place, but committed a bogey at the par-four 16th after a mediocre chip from rough just off the green.

But Park, consistently one of LPGA's best putters, drained a 25-foot downhill putt for a birdie at the 17th to go back to 14-under.

She found rough off the tee at the 18th but managed to score a birdie to force the playoff.

Park came within inches of getting eliminated on the second playoff hole, when her third shot landed just above the yellow line marking the water hazard in front of the green. She saved par to stay alive in the battle.

On the third playoff hole, all three players landed their third shots within birdie range, but Song pushed her putt and fell out of contention.

This will be the first Monday finish at an LPGA major since the 2011 US Women's Open, when South Korean Ryu So-yeon beat countrywoman Seo Hee-kyung in a playoff. (Yonhap)