The news came as both Koreas and the US are gearing up for an inter-Korean summit in April and a possible US-North Korea summit in May. 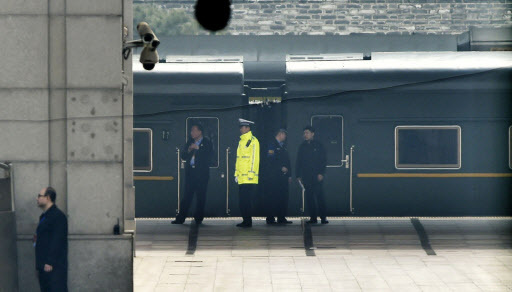 A special train is seen at Beijing Railway Station in Beijing Tuesday, March 27, 2018. Speculation about a visit to Beijing by North Korean leader Kim Jong Un or another high-level Pyongyang official was running high Tuesday amid talk of preparations for a meeting between the North's reclusive leader and President Donald Trump. (Kyodo News via AP - Yonhap)
Bloomberg said Tuesday that Kim was in Beijing, citing three sources familiar with the matter, while adding that the purpose and itinerary of his visit are not yet known.

CNN also said that “an official with deep knowledge of North Korea” told the media outlet that there was a “strong possibility” that the young North Korean leader had set foot in China’s capital.

A large security presence was spotted outside Beijing’s Diaoyutai guesthouse, which was used to accommodate North Korean leaders in the past. 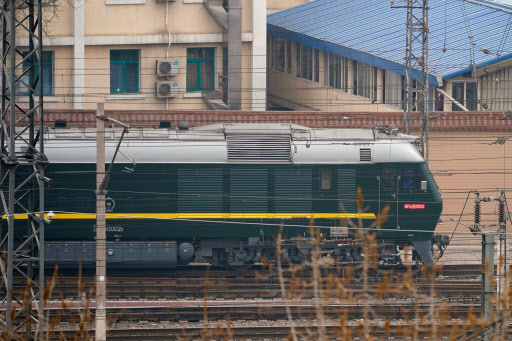 A train believed to be carrying a senior North Korean delegation leaves the Beijing Railway Station in Beijing, China March 27, 2018. (REUTERS - Yonhap)
Korean newspaper Chosun Ilbo said that the delegation had included Kim and that it had departed for North Korea after wrapping up the visit Tuesday, citing an unnamed senior intelligence official.

If Kim’s visit is confirmed, it would be the North Korean leader’s first known overseas trip since coming to power at the end of 2011, after his father and predecessor Kim Jong-il’s death. 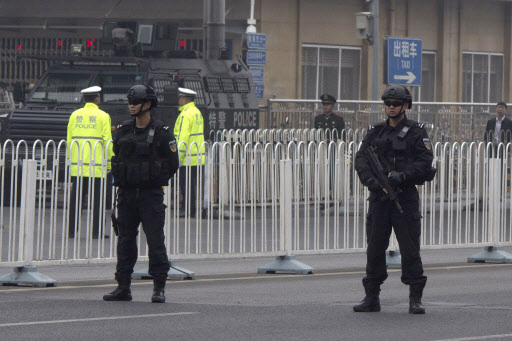 Heavily armed police guard an area outside a train station ahead of the arrival of a convoy in Beijing, China, Tuesday, March 27, 2018. The activity followed the arrival Monday of a train resembling one used by North Korea`s previous leader, and a foreign guesthouse in Beijing had a heavy security presence overnight. Some media have speculated that North Korean leader Kim Jong Un was making a surprise visit to China. (AP - Yonhap)
On Tuesday, analysts also raised the possibility that the mystery visitor may be a pairing of the North Korean leader’s sister Kim Yo-jong and nominal state head Kim Yong-nam as special envoys of Kim Jong-un. The two came to South Korea as part of the North’s high-level delegation for the PyeongChang Winter Olympics in February.

In response to a question on whether Kim Jong-un or another high-level North Korean official was visiting, Chinese Foreign Ministry spokeswoman Hua Chunying said she was “not aware” of the situation, according to the AFP.

“If we have information, we will publish it,” Hua said.

South Korea’s presidential office Cheong Wa Dae on Tuesday was also unable to confirm reports of Kim’s Beijing trip, saying it has yet to identify the presence of a top North Korean official there, but was leaving “all possibilities” open.

“We are carefully watching the situation concerning things that are currently happening in Beijing, with all possibilities in mind,” a Cheong Wa Dae official told reporters, declining to be named.

He added that “certain movements” were detected on the North Korean side a few days ago, but was unable to identify who was in Beijing.

“An improvement in relations between Beijing and Pyongyang is a positive signal ahead of the summits between the two Koreas and between the United States and the North (planned for next month and May, respectively),” the official said. 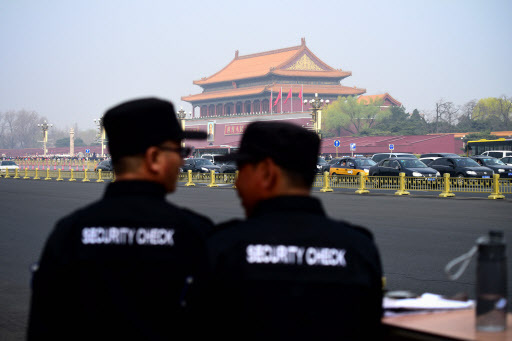 Two security guards watch near the Tiananmen Square in Beijing on March 27, 2018. Speculation intensified on March 27, 2018 that North Korean leader Kim Jong-Un was in Beijing for a surprise visit, after Japanese media reported the arrival of a special North Korean train met by an honour guard under tight security. (AFP - Yonhap)
Seoul’s Foreign Ministry and spy agency both echoed Cheong Wa Dae, saying that they are closely looking into the situation.

White House spokesman Raj Shah said the US could not confirm reports of Kim’s visit to China, but instead reiterated President Donald Trump’s plans to meet with Kim. Shah said the US-led international pressure campaign against Pyongyang “has paid dividends and has brought the North Koreans to the table.”

Analysts here say that if Kim was actually in Beijing, it could be part of his plan to break out of the current diplomatic isolation brought upon the reclusive regime by its nuclear weapons program.

But they also expressed doubts over whether Kim would visit China in such a “secretive” manner.

“If the purpose of the visit is to improve North Korea-China ties through a summit between the two leaders of the nations, then there is no reason to carry out the first formal meeting in such secrecy” said Cha Du-hyeogn, a researcher at the Asan Institute for Policy Studies.

North Korea’s relations with China, a traditional ally, is believed to have soured in recent years with China’s support of international sanctions against North Korea chief among a number of points of conflict.

Meanwhile, Japanese Prime Minister Shinzo Abe said Monday that Tokyo has been communicating with Pyongyang through “various means” on the possibility of meeting Kim, while also voicing a positive note about the prospects of opening a three-way dialogue involving Washington.

“We have been communicating with North Korea through various means, including using embassy channels in Beijing, but I will refrain from revealing any further details,” Abe told an Upper House Budget Committee session that came on the heels of recent media reports saying Tokyo had conveyed to Pyongyang Abe’s willingness to hold talks with Kim, according to the Japan Times.