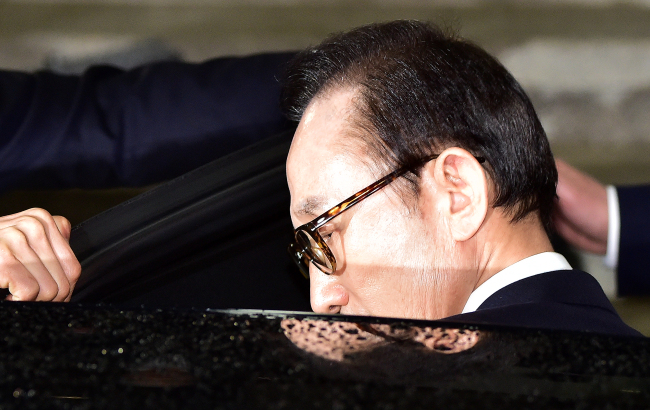 Former President Lee Myung-bak leaves the Seoul Central District Prosecutors’ Office late night on Wednesday after he was questioned by prosecutors on charges of bribery, embezzlement and tax evasion. Yonhap
Lee faces allegations that he ran a slush fund amounting to 12 billion won ($11 million) hidden in the auto parts maker DAS, according to the Seoul Central District Prosecutors’ Office.

Although Lee’s elder brother Lee Sang-eun is officially the largest shareholder and chairman of DAS, it is alleged that the former president is the real owner of the company.

Lee is also accused of misappropriating money from the National Intelligence Service. He allegedly gave orders that led to the NIS handing over a large sum from its budget allocated to the agency’s espionage activities. The budget for special activities is not subject to parliamentary review.

Lee has denied most of the alleged wrongdoings, but he admitted to taking money from the state spy agency. He is likely to face an arrest warrant, as the prosecution thinks Lee may destroy evidence, according to local media reports.

While the prosecution closes in on the former conservative leader, new allegations against his eldest son Lee Si-hyung have surfaced.

According to reports, Lee Si-hyung -- who is cited as an accomplice in his father’s alleged wrongdoings involving DAS -- took DAS dividends belonging to Lee Sang-eun.

Prosecutors have reportedly secured testimonies from DAS employees that Lee Si-hyung took dividends amounting to some hundreds of millions of won that were supposed to belong to the company’s Chairman Lee Sang-eun.

The testimonies are seen by prosecutors as evidence that the former president is in fact the real owner of the auto parts manufacturer.

In addition to his son coming under scrutiny, Lee Myung-bak’s wife Kim Yoon-ok has been accused of taking a large bribe from a businessman during her husband’s presidency.

It has also been alleged that the former first lady used a corporate credit card issued to DAS, adding embezzlement of corporate funds to the list of allegations against her.

The investigation surrounding Lee as well as his family and relatives came a year after his predecessor former President Park Geun-hye was arrested on a series of corruption charges.

Nearly 20 former key aides and relatives of Lee have been investigated as part of the probe, including his longtime aide Kim Paik-joon, former senior presidential secretary for administrative affairs dubbed as Lee’s “butler.”