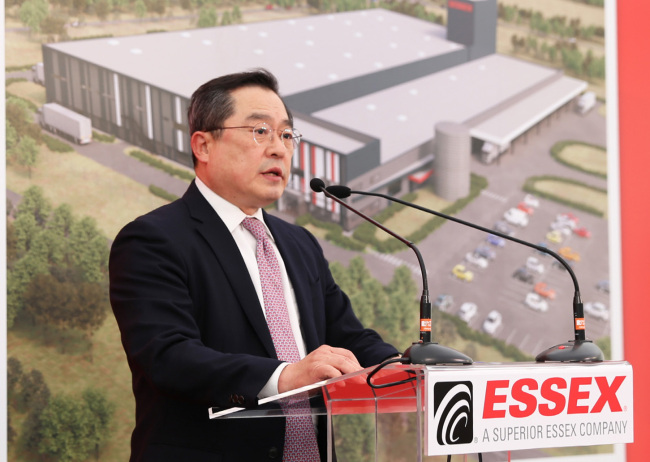 LS Group Chairman Christopher Koo speaks at a groundbreaking ceremony of a magnet wire plant held in Serbia on Wednesday. Essex is LS` US subsidiary. (LS Group)
The project is being carried out by its US subsidiary Superior Essex. The group has invested 18.5 billion euros ($23 million) to build the plant, which will be capable of producing 12,000 metric tons of magnet wire a year. It is considering additional investment in its production site in Zrenjanin, 90 kilometers north of the Serbian capital, it added. Commercial production of the products will start next year.

The plant is the latest investment by LS Group, which launched an electric car parts plant in Poland and a solar power plant in Japan.

LS Group Chairman Christopher Koo said the conglomerate’s Serbian investment is a part of growth strategy, and is expecting the new plant to become the production center for its east European operation.

Its US affiliate, Superior Essex, is one of the largest wire and cable manufacturers worldwide, and generated $2 billion in sales last year. It is the sole magnet wire supplier to US EV giant Tesla.