[ The Korea Herald – Send E-mail ]
Boosting labor productivity gains urgency
By Kim Kyung-ho
Published : Mar 7, 2018 - 16:23
Updated : Mar 7, 2018 - 16:23
Calls are growing for more strenuous efforts to improve the country’s labor productivity to offset the negative effects of reduced work hours and increased wages on companies and the economy as a whole.

Korea’s labor productivity remains near the bottom among major economies.

According to data from the Korea Productivity Center, the country’s labor productivity grew at an annual average of 0.38 percent for the 2009-16 period, while the yearly increase in real wages averaged 1.66 percent. 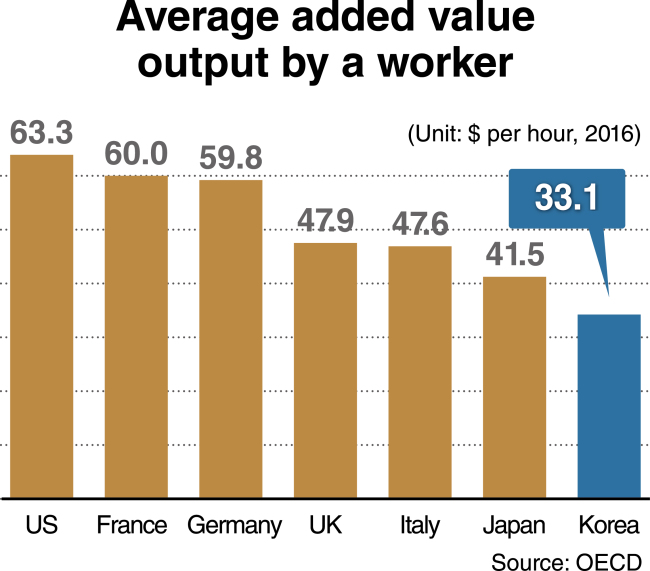 Local businesses had insisted discussions on reducing work hours should proceed in step with efforts to enhance labor productivity.

Pushing aside their demand, a parliamentary committee last week passed a labor law revision bill to cut the maximum working hours to 52 hours a week from the current 68 hours, starting from July at firms with 300 or more employees.

The measure to cut work hours followed a 16.4 percent increase in the minimum wage to 7,530 won for this year.

President Moon Jae-in asked his aides Monday to ensure the reduction in work hours would lead to increasing employment through job sharing and improving the quality of people’s lives.

He has often cited an OECD report showing Korean workers worked 2,069 hours on average in 2016, far above the organization members’ average of 1,764 hours. His hope is to cut the average annual work hours in the country to 1,800 hours before his five-year term ends in 2022.

But many experts note his labor-friendly measures would bring more difficulties to workers as well as their employers and undermine the country’s competitiveness unless they were accompanied by effective efforts to improve labor productivity. 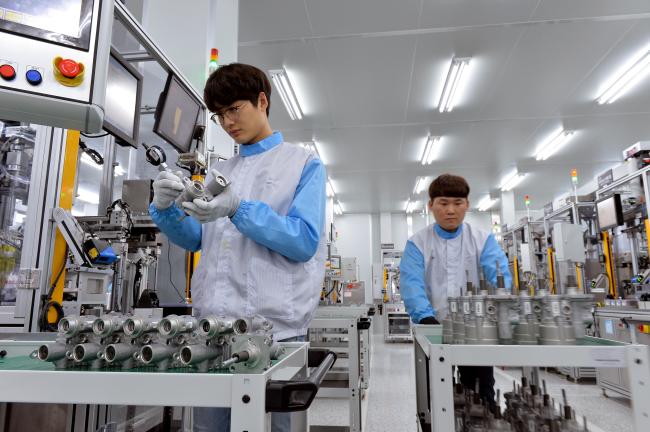 Workers at a production line of Hyundai Mobis in South Chungcheong Province. (Yonhap)
Increasing wage costs at home, coupled with rising trade barriers abroad, have been pushing more Korean companies to move production to other countries that are competing to forge a more business-friendly environment.

This corporate exodus would exacerbate the country’s unemployment problem, embarrassing the Moon administration, which has vowed to put top priority on creating more jobs.

The administration plans to draw up a supplementary budget worth about 15 trillion won this year to bolster employment.

In the 2016 ranking of labor market flexibility, announced by the Swiss bank UBS, Korea placed 83rd on a list of 139 countries surveyed.

The productivity gap between large and small firms and between manufacturing and service sectors remains wider in Korea than other major economies.

A KPC study found labor productivity of small and mid-sized enterprises remained at 29.7 percent of large companies in Korea in 2013, the lowest among 24 OECD members surveyed.

Experts note what should be done to enhance labor productivity, among other things, is to overhaul the wage system from a seniority-based to a performance-based one and readjust industrial structures to the “fourth industrial revolution.”

Educational and training programs also need to be upgraded to place workers losing jobs in the course of industrial restructuring in new areas.

Cho Seong-jae, a researcher at the Korea Labor Institute, said increased corporate investment in innovative technology should be coupled with improved labor-management relations if the country’s low productivity is to be boosted.

Calls are growing for the Moon administration to take a more balanced position between labor and management to help expedite efforts toward enhancing productivity.

Labor disputes are expected to intensify this year as labor groups are continuing to demand sharp wage hikes and oppose expanding the scope of ordinary wages.

Corporate officials worry reduced work hours would further strain labor-management ties as employees are asking for measures to make up for their reduced income.

Stronger labor protests would be embarrassing for the Moon administration, which has barely touched on the issue of labor productivity to avoid estranging itself from workers since it was launched in May.

Previous administrations, conservative or liberal, have seen more labor disputes erupt in their second year as labor groups began taking a harder stance in a departure from their initial wait-and-see attitude.