[ The Korea Herald – Send E-mail ]
#MeToo spreads to business sphere, partially
By Cho Chung-un
Published : Mar 6, 2018 - 15:59
Updated : Mar 6, 2018 - 16:05
A series of revelations involving prominent figures allegedly committing sexual crimes appears to have reached the nation‘s business arena, although its impact on the market has been limited so far.

A fresh allegation that Gov. An Hee-jung of South Chungcheong Province sexually assaulted his secretary not only sent shockwaves nationwide, but also to the nation’s second largest bourse, with shares of companies even remotely related to the politician collapsing rapidly on Tuesday.

Share price of BG T&A listed on the tech-heavy Kosdaq market plunged to 3,410 won as of 9:05 a.m., hours after a live TV interview with An’s secretary Kim Ji-eun claiming that she was assaulted by him four times in the last eight months. The wireless device manufacturer has been categorized as an An-related firm as its CEO Lim Hak-kyu is the governor’s college alumnus.

Other companies that are either based in South Chungcheong Province or those who signed contracts with the provincial office for projects, were trading significantly lower than a day before for no particular reason other than their relations with An.

Ewon Comfortech, a passenger seat manufacturer for commercial vehicles saw its shares plummet 24.81 percent in the morning while shares of SG&G, a car parts maker that has a fashion subsidy based in South Chungcheong Province, fell 17.59 percent. Shares of Cheongbo Industrial, another car parts maker based in Incheon, also dropped more than 14 percent in the morning, as the company’s CEO is reportedly a relative of An. 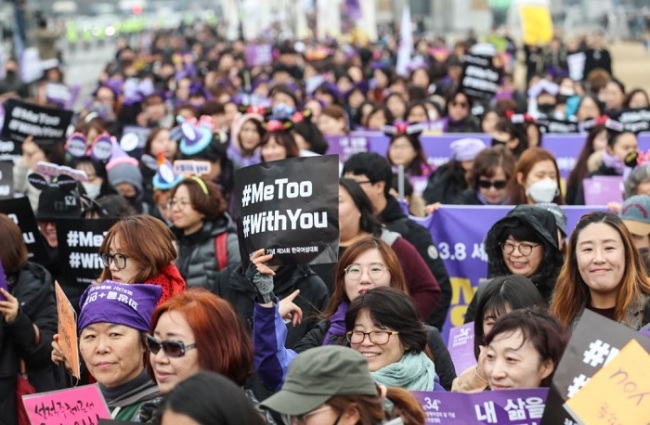 Women march for an International Women`s Day ceremony in central Seoul on March 4. (Yonhap)
Revelations of sexual misconduct among business figures remained relatively low compared to other industries in the ongoing #MeToo movement, with the highest profile allegation so far involving a boardroom member candidate for Posco.

Posco said in a statement on Monday afternoon that Park Kyung-suh, professor of finance at Korea University Business School, was dropping his candidacy as an outside boardroom member candidate amid claims that he had been accused of being involved in a sex scandal.

Posco said his withdrawal was due to “a personal reason.”

The statement was made right after a Pohang-based civic group raised suspicions that Prof. Park was reprimanded for being involved in a sex scandal, citing his record of receiving a suspension and wage cut for three months in 2014 over the scandal. The group did not identify the exact accusations that he had faced.

Park is an expert on corporate governance who currently leads an advisory committee for public fund management under the Financial Service Commission.

He was nominated as Posco’s first outside boardroom member on recommendation by foreign institutional investors including Dutch pension giant APG and Robeco, another Dutch asset management firm.

Meanwhile, a study showed that sexual harassment is rampant in offices, with most of victims saying they were harassed by their bosses.

According to the survey conducted by the Federation of Korean Trade Union, a conservative umbrella union here, eight out of 10 assailants were the boss of the victim, followed by co-workers and clients. Incidents of sexual harassment happened mostly during company dinners, or hoesik, followed by within offices and during business trips. Sexual comments or jokes were mostly the case, but most workers said they suppressed their anger and kept silent.