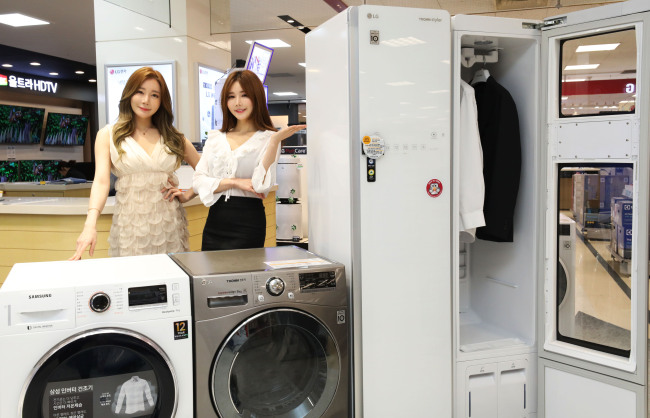 The LG TROMM clothes dryer and TROMM Styler (E-Mart)
Both clothes dryers and steam closets had long been seen as supplementary or niche items here. But with changing lifestyles and shifting priorities of consumers, the two appliances have increasingly become more of a necessity than a luxury, industry watchers said.

According to local discount chain E-mart, sales of clothes dryers and steam closets accounted for 31.4 percent of total sales of laundry-related appliances in 2017.

From January to February this year, sales of these two appliances skyrocketed by 350 percent year-on-year. In just over two months, they have accounted for 46 percent of total sales of laundry appliances.

Clothes dryers, which are mainly tumble dryers here, help reduce the time for hanging clothes out to dry. They are considered to be convenient options for days of bad weather and air pollution. Electricity used by the appliance is also lower than what most people assume, according to manufacturers. It costs about 117 to 130 won per cycle.

Meanwhile, steam closets -- used by hanging a piece of clothing inside to be steam cleaned -- have become alternatives to traditional washers for those seeking to reduce laundry loads. They are promoted as being able to remove odors, reduce wrinkles and keep clothes clean by vibrating clothes 180 times per minute.

Both machines have air purifying modes -- a useful function for people who have qualms about the quality of air.

“There is increased public interest in keeping clothes clean after coming back from outside as the fine dust and yellow dust season is approaching. The sales increase of tumble dryers and steam closets are attributable to the consumer trend in which consumers want to conveniently sanitize their clothes at home,” said Park Hye-ri from E-mart.

Park said clothes dryers and steam closets are especially popular among newly-weds and double income families who lack the time to do household chores. More than 76 percent of those who purchased tumble dryers and the steam closets were those in their 30s and 40s who work.

Kim Ji-myung, a 30-year-old office worker who recently tied the knot, is one such consumer.

“I tend to do all my laundry on the weekends, because both my husband and I get back home late at night on weekdays. We can save a lot of time by simply putting laundry into machines,” she said.

“Regular trips to drycleaners have become a time-consuming hassle,” she added.

LG Electronics and Samsung Electronics, two big names that dominate the clothes dryer and steam closet market, used to make their clothes dryers mainly for the overseas market. However, in the past two years, they have been making aggressive marketing efforts at home. 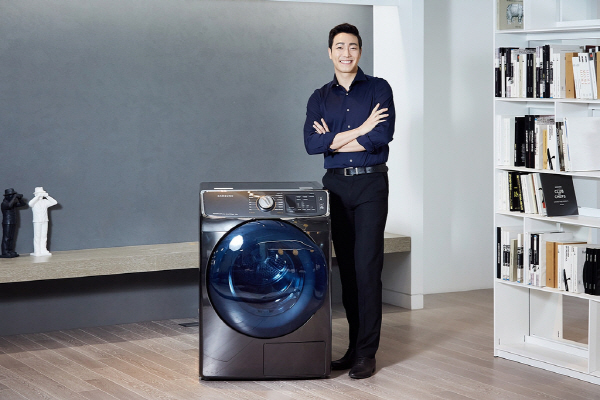 Samsung registered the design of a new steam closet with the Korean Intellectual Property Office in February. The company released a newer version of a 14-kg tumble dryer last month, the largest size in the market.

The clothes dryer market saw a sixfold jump in 2017, hitting 600,000 units in sales. The number skyrocketed with Samsung also beginning to sell its tumble dryer in March last year, turning its eye to the domestic market.

Industry insiders viewed that the market size would hit 1 million units by the end of this year.

“While sales of steam closets were at the 10 percent level compared to the total sales of clothes dryers in the last year, with more big names striving to release new items, the popularity of these appliances will continue,” said an official from Lotte Hi-Mart.