In December, the administration announced a new direction for corporate restructuring, which focused on ensuring a balance between financial logic and industrial consequences and considering the effects on regional economies and employment.

To fit into the redefined approach, the government’s main arm for industrial restructuring has been changed from the Financial Services Commission to the Ministry of Trade, Industry and Energy.

Such moves came in response to criticism for a misjudged liquidation of a faltering shipping company last year, mainly out of financial considerations. 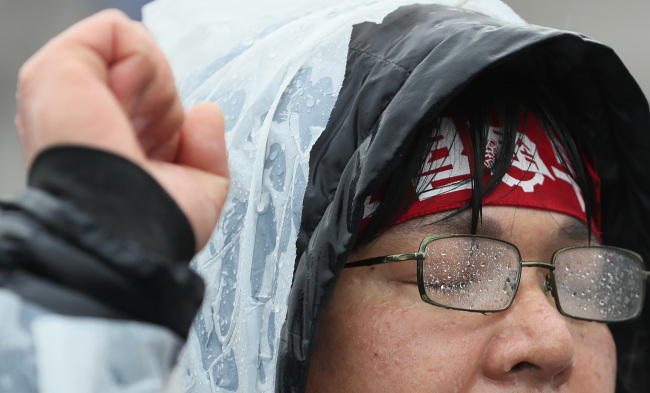 (Yonhap)
Key principles for restructuring failing firms, such as workers’ agreement to share pains, have been pushed aside by calls for increased support from the government.

Industrial restructuring accompanied by massive layoffs had been a thorny task for all previous governments.

But the Moon administration, which has vowed to protect labor interests and create more jobs, seems particularly hesitant to push for restructuring that would cause large job losses.

It is also under pressure to avoid exacerbating voter sentiment by leaving many workers unemployed ahead of the June local elections.

“Restructuring is basically based on sharing pain,” said Oh Jung-geun, a professor of finance at Konkuk University.

“Nevertheless, the government is amplifying voices of labor unions and political circles by sending signals that it will protect jobs in the process of restructuring.”

President Moon helped heighten workers’ expectations for government support when he depicted a rosy future for the troubled shipbuilding industry during his visit to a shipyard on the southern coast in January.

His remarks were interpreted by industrial officials as suggesting the government would spend more money to keep two faltering shipbuilders afloat.

An assessment by creditor banks in November showed liquidating the troubled shipbuilding companies, which had received a combined 7.1 trillion won ($6.57 billion) in rescue funding, would make more economic sense than sustaining them.

A month later, the government delayed a decision on their fate until after the release of a report by a consulting firm on the long-term competitiveness and viability of the two shipbuilding companies.

In a meeting arranged by a local chapter of the ruling party, workers from the troubled shipbuilders called for government support, arguing that closing their shipyards would have a far-reaching negative impact on regional economies.

Indecision has also complicated and protracted the process of restructuring Kumho Tire and General Motors Korea. 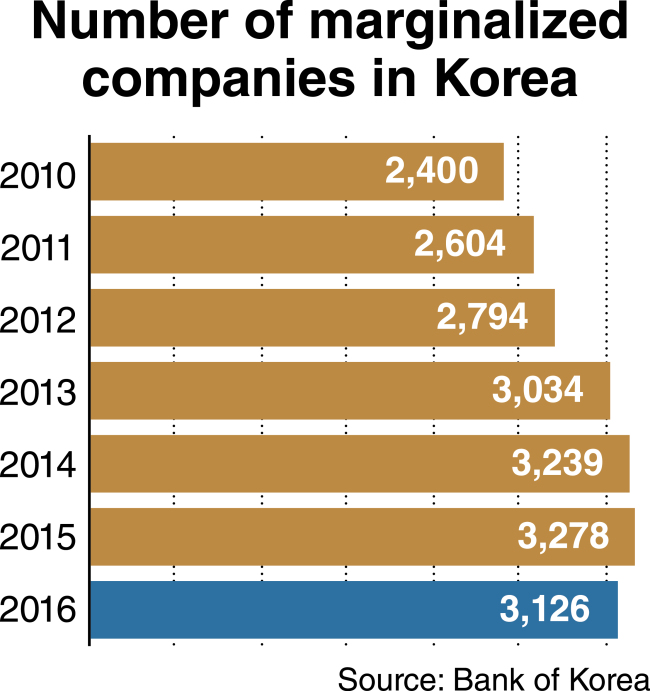 According to data from the Bank of Korea, the proportion of potentially insolvent companies, which refer to firms whose interest payments exceed operating profits, rose from 30.2 percent in 2015 to 33 percent in the first half of 2017.

The number of marginalized firms that had failed to pay interest on their loans with their operating profits for three consecutive years increased from 2,400 in 2010 to 3,278 in 2015 before slightly decreasing to 3,126 in 2016.

Interest rate hikes this year are expected to further increase the number of insolvent companies. Analysis by the central bank projected a 1 percentage point rise in borrowing costs would increase annual interest payments by local corporations by an average of 14.2 percent.

Deteriorating external conditions, including a looming global trade war prompted by mounting US protectionism and retaliatory moves by other major economies, make it more urgent for Korea to restructure its export-dependent industries.

In a meeting with reporters last week, BOK Gov. Lee Ju-yeol said it was necessary to view restructuring not only in the context of increasing unemployment but more comprehensively as a way of reallocating human resources and materials more efficiently.

“Corporate restructuring should be carried through persistently from the perspective of consolidating the foundation for the country’s long-term growth,” said Lee, who was nominated by President Moon on Friday to serve another four-year term after his tenure expires at the end of March.

Economists note failure to carry out industrial restructuring in a timely manner could cause Korea to go through a long recession like the one that had weighed on Japan for two decades since the early 1990s.

Sung Tae-yoon, a professor of economics at Yonsei University, said injecting fiscal funds into failing companies just to keep them afloat would weaken the competitiveness of the whole industry.

He noted unprincipled government support that was not coupled with sacrifices by labor and management would only amount to subsidizing wages at failing companies.