Dozens of US couples donned crowns and cradled guns at a controversial ceremony in a Pennsylvania church on Wednesday, forcing a nearby school to close and angering protesters.

The incongruous event in Newfoundland, part of rural Pennsylvania that voted 68 percent for President Donald Trump in 2016, underscored the gulf between those who fiercely defend the US constitutional right to bear arms and advocates of greater gun control.

The event, in which couples commit to each other, was organized by Moon Hyung-jin, younger son of the late Moon Sun-myung , whose World Peace and Unification Sanctuary is a tiny spin-off of the Unification Church founded by his father, a self-declared "messiah" considered a charlatan by critics. 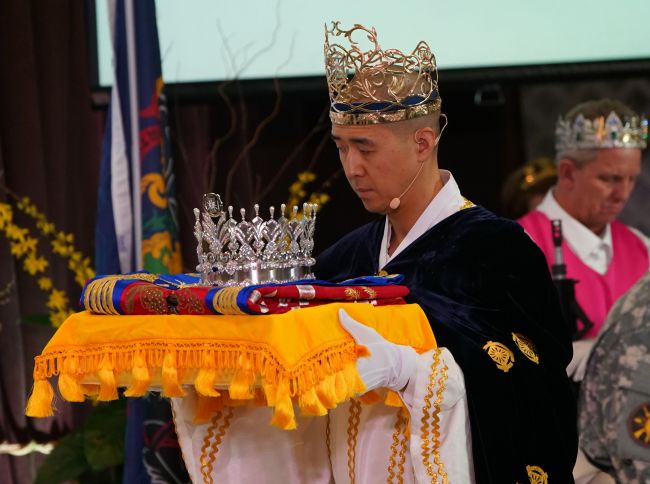 Reverend Moon Hyung-jin, the church's pastor and the son of the late Sun Myung Moon, attends a ceremony while people with their AR-15-style rifles in their cases watch the event at the Sanctuary Church in Newfoundland, Pennsylvania, US, Feb. 28, 2018. (Reuters) 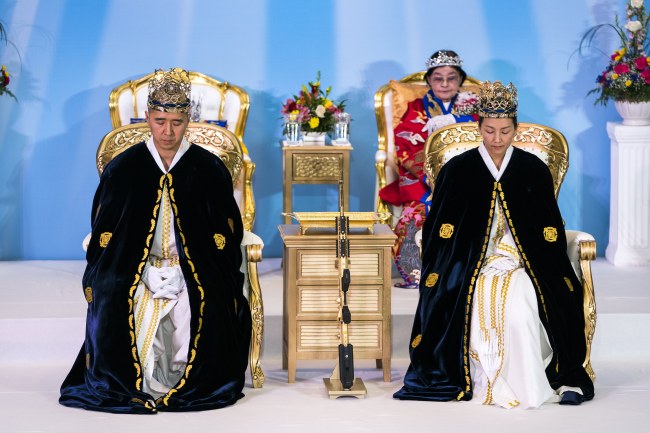 The younger Moon is homophobic and close to the extreme right, according to the Southern Poverty Law Center.

He extols a religion of weapons and prayer, in which congregants are "sovereign" of their own families, required to defend faith and kin alike.

Moon speaks regularly on YouTube alongside an AR-15 semi-automatic rifle and arrived at Wednesday's celebration accompanied by three armed men in fatigues.

While the commitment ceremony, attended by around 500 people, evoked some of the mass weddings for which his father was famous, the younger Moon deviated in encouraging congregants to carry an AR-15 -- albeit locked and not loaded.

It fell on the same day that students returned to their high school in Parkland, Florida for the first time since a 19-year-old used an AR-15 to kill 17 students and school staff two weeks ago. 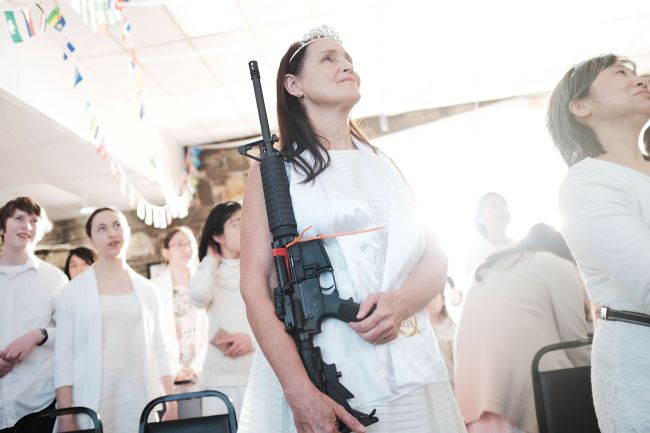 A woman holds an AR-15 rifle during a ceremony at the World Peace and Unification Sanctuary on February 28, 2018 in Newfoundland, Pennsylvania. (AFP-Yonhap) 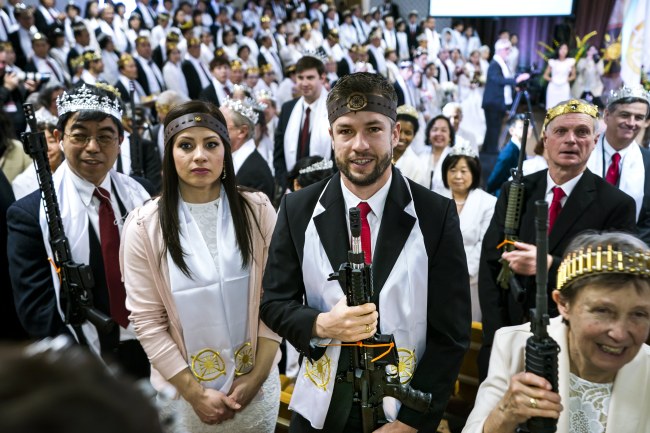 Parishioners with the Sanctuary Church hold onto their AR-15s, which churchgoers were encouraged to bring to a blessing ceremony to rededicate their marriages, at the World Peace and Unification Sanctuary in Newfoundland, Pennsylvania, USA, 28 February 2018. (EPA-Yonhap)

With the United States again riled by torturous debate on gun controls, an elementary school near the Sanctuary closed for the day.

Last Saturday, the younger Moon organized a dinner "in thanks of President Trump" to benefit the Gun Owners Foundation.

A dozen protesters gathered outside the event on Wednesday, holding up posters that read "Worship God, Not Guns" and "God Does Not Bless Guns."

Guns in the room

"I got to the tipping point," said Sheila Cunningham, a demonstrator from Milford 30 miles (48 kilometers) away who came with her 18-year-old daughter Sophie to protest.

She said she was "very annoyed" that the event was tantamount to political endorsement and that it was "time to revoke" the non-profit status of such religious groups.

But those in the congregation, like many other Americans, believe US school shootings do not justify stricter gun laws in a country where firearms are linked to more than 30,000 deaths annually.

"Unfortunately in most of the world, people seem to feel that the only people that should have arms are the ones that govern us," says Andrew Kessler, a lawyer from the affluent suburb of Westchester, New York, dressed in a black suit and red tie.

"I don't think restricting gun ownership has proven that where there are less guns, there will be less violence," he said, carrying the AR-15 he purchased a few months ago.

John Paul Harris, 68, from nearby Scranton and wearing a black NRA cap, called himself "a proud life member" of the National Rifle Association, the powerful American gun lobby group.

"I wish never to have to use it on a human being," he said of his weapon.

Yet with all the guns in the room, the church at times gave off the air of a private militia. 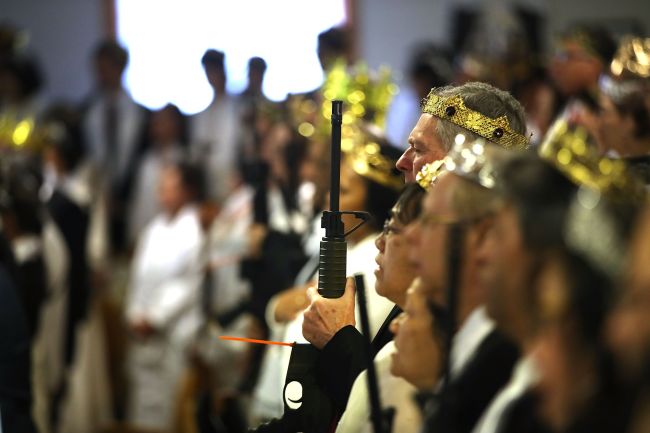 Couples hold AR-15 rifles and other guns during a ceremony at the World Peace and Unification Sanctuary on February 28, 2018 in Newfoundland, Pennsylvania. The controversial church, which is led by the son of the late Rev. Sun Myung Moon, believes the AR-15 symbolizes the "rod of iron" in the biblical book of Revelation, and it has encouraged couples to bring the weapons to a "commitment ceremony" or "Perfection Stage Book of Life Registration Blessing". Officials in the rural area in the Pocono Mountains have reportedly told elementary school parents that their children will be relocated on Wednesday to accommodate the AR-15 ceremony. The semiautomatic rifles are similar to the weapon used in a Florida high school shooting on February 14. (AFP-Yonhap)

"In essence, you know, we believe in a peace police, in a peace militia,"

said Kyle Toffey, a helper at the ceremony wearing a metal crown. "It's just that we need to be God-centered when we are armed." (AFP)