[ The Korea Herald – Send E-mail ]
Korea to scrutinize GM’s transfer pricing, cost to selling price ratio
By Kim Bo-gyung
Published : Feb 28, 2018 - 15:54
Updated : Feb 28, 2018 - 18:35
With an investigation into GM’s financial records slated to begin this week, the Seoul government appears to be upping the pressure against the US automaker by suggesting a tax audit.

Kim Sang-jo, chairman of the country’s corporate watchdog Fair Trade Commission, said Tuesday he would discuss with the National Tax Service a tax audit over the US automaker’s transfer pricing and high rate of cost to selling price.

Demands to comb through the US firm’s tax status have also been rising from the political sector, with Rep. Ji Sang-wook of the Bareun Future Party insisting the government launch multiple inspections into suspicions surrounding the carmaker.

During a parliamentary National Policy Committee meeting held Tuesday, FTC Chairman Kim said, “We will consult with the National Tax Service, as the need (for a tax audit) has been recognized,” when asked if he agrees on a tax audit into GM. 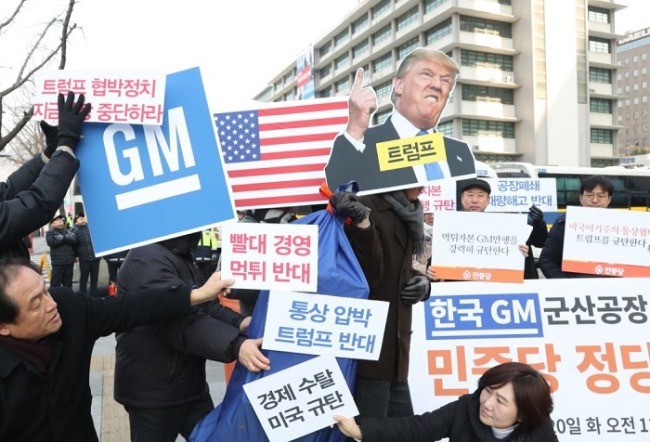 The automaker, which shocked the industry after announcing the closure of its Gunsan plant earlier this month, is suspected of exporting vehicles produced at the Gunsan plant in North Jeolla Province at low prices to affiliates.

The high rate of the cost to selling price alongside transfer pricing had been pointed out as one of the key reasons that led to GM Korea’s net losses of 1.9 trillion won ($1.7 billion) between 2014 and 2016, eventually leading to the shutdown of the Gunsan plant.

During the session, Rep. Ji said that GM Korea’s performance totals 1.1 trillion won in net profit in the cited period based on calculations that apply GM North America’s rate of cost to selling price to the local unit.

“Calculations prove that the transfer pricing set based on GM US headquarters’ business strategy is illogical and wrong,” Ji argued.

“Had the rate of the cost to selling price (at GM Korea) been at GM’s average levels, it would not have been subject to restructuring and remained a sound automobile manufacturer.”

GM Korea posted a net profit of 101 billion won in 2013 when the cost to selling price ratio was 86.7 percent.

GM International President Barry Engle denied speculations that GM Korea had been selling complete knock-downs at a lower price to the carmaker’s other affiliates during a closed-door meeting held with politicians last week.

KDB Chairman Lee Dong-gull also said during the meeting, “To look into the cost to selling price rate (at GM Korea), we are in talks with GM regarding the limit and boundaries of the inspection.”

“As we see that the possibility of GM’s revival is linked to the cost structure, we will focus on it (during the inspection).”

Others in the National Assembly are also putting together measures to navigate the difficulties cited by GM as reasons for its latest decision.

“Each party is operating a special committee, but given that GM is a global company along with the uncertainty surrounding when the Bupyeong and Changwon factories will be subject to the same situation, there needs to be a non-partisan committee.”