The half-brother of North Korea's leader expressed fears for his life months before he was assassinated in Malaysia in a Cold War-style hit, a court heard Tuesday.

The chilling new detail emerged at the trial of two women, Siti Aisyah from Indonesia and Doan Thi Huong from Vietnam, who are accused of murdering Kim Jong Nam at Kuala Lumpur International Airport on Feb. 13 last year. 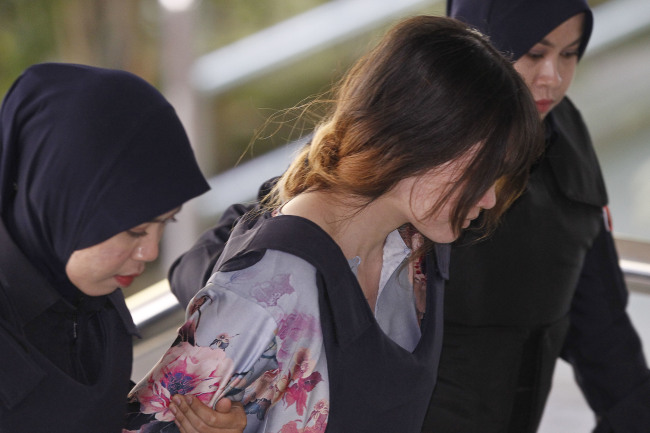 Vietnamese Doan Thi Huong, center, is escorted by police as she arrives for a court hearing at Shah Alam High Court in Shah Alam, Malaysia, Tuesday, Feb. 27, 2018. Doan and Siti Aisyah of Indonesia have pleaded not guilty to killing Kim Jong Nam on Feb. 13, 2017 at a crowded Kuala Lumpur airport terminal. They are accused of wiping VX on Kim's face in an assassination widely thought to have been orchestrated by North Korean leader Kim Jong Un. (AP-Yonhap)
Defence lawyers have argued that the women were recruited to take part in what they thought were prank TV shows but were instead tricked into becoming inadvertent assassins, in an elaborate plot by a group of North Korean agents.

The women, in their 20s, have denied carrying out the murder of Kim Jong Un's estranged half-brother by smearing a nerve agent on his face as he waited for a flight to Macau. They face death by hanging if found guilty.

The High Court in Shah Alam, outside Kuala Lumpur, heard Tuesday that someone whom Kim knew in Malaysia, called Tomie Yoshio, would send his personal driver to pick up the North Korean when he came to the country  and drive him around.

During cross-examination of the police chief investigating officer, Aisyah's lawyer Gooi Soon Seng said that Yoshio "would direct (his driver) Ahmad Fuad to take Kim Chol at the airport and send him wherever he wants to go".

Kim Jong Nam was carrying a North Korean passport in the name of Kim Chol when he was killed, and during the trial he is still sometimes referred to by that name.

Gooi said this was because Kim had told Yoshio that "my life is in danger" six months before the murder on February 13, 2017.

"I am scared for my life and I want a driver," Kim was also quoted by the defence lawyer as telling Yoshio.

The officer being grilled, Wan Azirul Nizam Che Wan Aziz, agreed this was true based on Yoshio's statement to police.

It was not revealed in court who Yoshio was or where he came from.

The suspects, known to the women by pseudonyms, are accused of having tricked them into carrying out the murder before fleeing Malaysia. They were seen around the airport on the day of the murder.

"I state that the investigation towards the four suspects is not deep,"  Gooi said.