[ The Korea Herald – Send E-mail ]
[MWC 2018] Samsung not in rush for next phone after Galaxy S9 series
Samsung CEO says he will not obsess about being the first in next-generation smartphones
By Song Su-hyun
Published : Feb 27, 2018 - 15:19
Updated : Feb 27, 2018 - 16:10
BARCELONA, Spain -- Confessing that they were obsessed with being the first to release the newest technologies, Koh Dong-jin, head of Samsung Electronics’ mobile business, said Monday the South Korean tech firm was now more committed to developing products that can deliver meaningful value to consumers.

The message came at a press conference for Korean reporters after the Galaxy S9 Unpacked in Barcelona, as Koh once again confirmed that Samsung will launch next-generation foldable display phones and those with in-display fingerprint sensors when the company is fully ready. 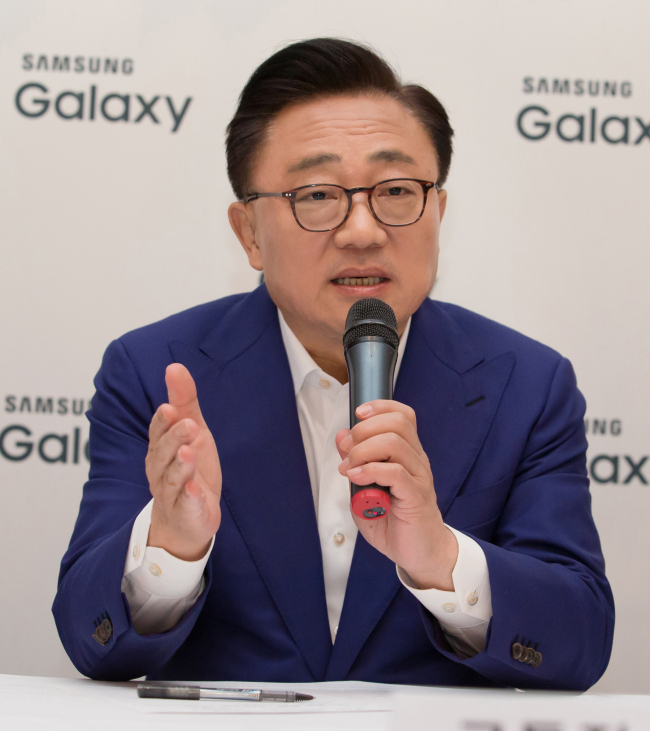 Samsung Electronics Koh Dong-jin speaks during a press conference held in Barcelona, Spain on Monday. (Yonhap)
“We developed mobile phones earlier than China, and we were obsessed with being the world’s first and industry’s first rather than thinking about how this innovation would be meaningful to consumers,” Koh said.

“Being the first turns out to be meaningless today, and our strategy is to launch something that consumers believe meaningful and valuable at a right time.”

Koh was answering a question about the company’s roadmap for innovation in hardware as Samsung was compared to recent moves by Chinese rivals seeking for in-display fingerprint sensor and foldable display technologies.

The Samsung CEO had said at a Galaxy Note 8 launch show last year that foldable smartphones will be launched in 2018.

However, Samsung is reportedly facing technological difficulties for the commercialization of such a new type of phones.

Instead of foldable phones, Samsung will introduce its first artificial intelligence-based speaker in the second half of the year, Koh said.

“Again with the AI speaker, we will launch it when it’s ready with top quality, because we are a newcomer in the market,” he said.

Samsung has been working on the AI speaker with its affiliate Harman.

“Samsung’s AI speaker will be more than speaking to the machine and listening to music,” Koh said. “The speaker will not be a single hub, but be one of many platforms such as TV, refrigerator and other appliances that form a true Internet of Things environment.”

Samsung’s AI software Bixby will evolve from the first version to 2.0, and could be launched on the Galaxy Note 9 this summer, Koh said.

The company is currently conducting beta tests with around 800 outside developers in order to create an open ecosystem for Bixby.

“Bixby 1.0 was short of expectations as we were in a hurry, because the software had a structure that was difficult to expand its ecosystem,” Koh said. “Up until the launch, Bixby 2.0 will need intensive beta tests.”

In order to prepare for the fifth-generation network and 5G smartphones, Samsung’s IT & Mobile Communications business under Koh has renewed the organization’s business direction towards the 5G system, according to the chief.

“I made an announcement a month ago about the shift from 4G to 5G,” he said. “Samsung is thoroughly preparing for 5G in close cooperation with mobile operators.”

Samsung is known to be closely partnering with Korea’s leading mobile carrier SK Telecom on the development of 5G core network equipment, chipsets and smartphones.