YG’s new multifaceted dining complex consists of three restaurant brands: a meat place called “Three-Way Butcher,” a salad cafe called “3Birds” and a pub called “K-Pub,” all of which are operated by YG in conjunction with YG Foods, the agency’s restaurant business. 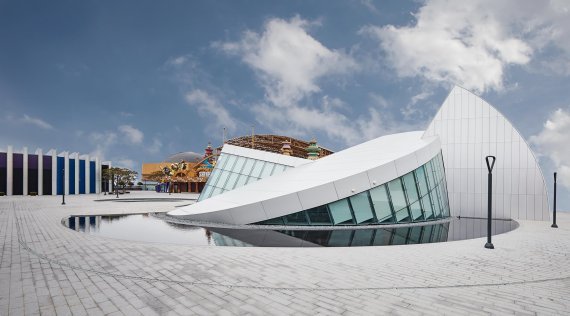 YG Republique (YG Foods)
YG Republique also has branches in Myeong-dong and IFC Mall on Yeouido, both in Seoul.

YG Entertainment artist G-Dragon, the frontman of Big Bang, also opened his own cafe and a bowling alley in Jeju Shinhwa World on the same day. Featuring the design ideas of the singer, the cafe called “Untitled, 2017,” after the title of his recent hit, is designed in the shape of the logo of his fashion brand Peaceminusone. The bowling alley AC.III.T includes a lounge pub.

The opening ceremony for YG Republique was held Sunday at Jeju Shinhwa World. It was attended by YG head Yang Hyun-suk and G-Dragon, along with other business representatives.

“I’ve noticed many of my shortcomings while opening the cafe. What I want the most is the cafe to be a comfortable place for people, not a ‘G-Dragon’s cafe,’” G-Dragon said.