The story of how the Korean women’s curling team came about has now become known worldwide. In 2007, classmates Kim Yeong-mi, whose name has reverberated through the curling venue at PyeongChang and global media outlets in the past weeks, and Kim Eun-jung, the skip who led the team to silver in women’s curling Sunday, decided to try their hand at the obscure sport as an extracurricular activity. Yeong-mi’s younger sister Kyeong-ae, in middle school at the time, and her friend Kim Seon-young, were soon roped in. Kim Cho-hi later joined the team.

It’s a case where infrastructure played a pivotal role in the fostering of talent. 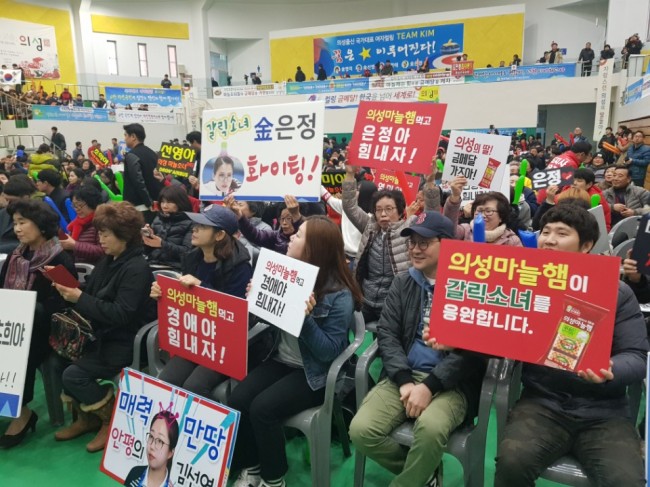 Uiseong County residents gather at a gymnasium in Uiseong to watch the women’s curling gold medal match between Korea and Sweden on Sunday, with signs in support of Korean team skip Kim Eun-jung. (Yonhap)
The five Uiseong natives, now known as “Team Kim,” were able to practice at the Uiseong Curling Club, Korea’s sole curling rink that meets the World Curling Federation’s standards.

Following the establishment of the club, the sport of curling, which involves launching a granite stone on ice and sweeping around its trajectory, has become a familiar sport to Uiseong residents.

Completed when skip Kim was in her first year of high school, the stadium gave the “Garlic Girls,” as they have also come to be known, a place where they could practice regularly.

Curling was first introduced to Uiseong, a region famous for its garlic produce, in the mid-1990s.

Kim Kyung-doo, the father of Team Kim’s coach Kim Min-jung and vice president of the Gyeongbuk Curling Association, introduced the sport to the county with Oh Se-jung, who is now the ice keeper at Uiseong Curling Club. Kim Kyung-doo and Oh had decided to bring the sport, born centuries ago in Scotland, over to Korea after having witnessed it in Canada. 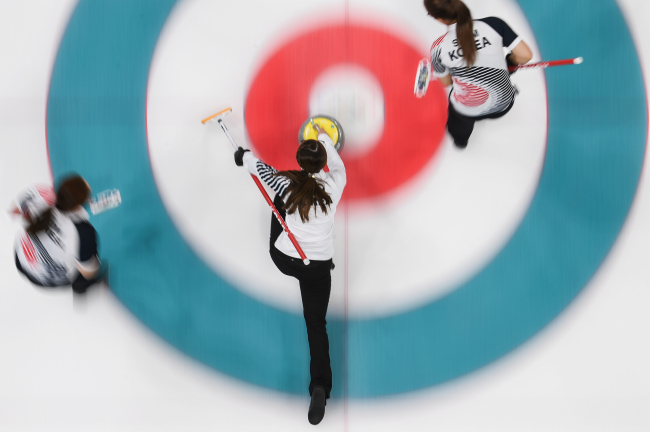 The Korean women’s curling team plays against Sweden at the Gangneung Curling Centre on Sunday, where they eventually fell 8-3. (Yonhap)
Though faced with difficulties in trying to promote a sport nearly unknown in the area, the two managed to persuade then-Uiseong Mayor Jung Hae-geol to build a stadium in the county.

The Uiseong Curling Club has now grown to host various international events, including the Pacific-Asia Curling Championships in 2011 and 2016.

“We received a lot of help from acquaintances, from North Gyeongsang Province and from Uiseong County,” Kim Kyung-doo told local media Sunday. “The quality of ice (at Uiseong Curling Club) is top-notch by world standards. When the construction team first asked us what the purpose of the stadium would be, we replied, ‘We want a place where (athletes) can train for the Olympic gold medal.’”

Support for Team Kim has exploded in the area. Some 500 locals gathered at the Uiseong Girls High School gymnasium Friday to watch Korea play against Japan in women’s curling, reports said. Younger students are aspiring to follow in the five players’ steps.

Uiseong County plans to build additional facilities for the stadium before the end of this year to allow easier access for handicapped and amateur players.

A new curling stadium, the second in the country, will open in Uijeongbu, Gyeonggi Province, in March, according to the city government.