[ The Korea Herald – Send E-mail ]
Korea-Japan political gridlock haunts currency swap renewal: BOK Gov.
By Son Ji-hyoung
Published : Feb 21, 2018 - 16:00
Updated : Feb 21, 2018 - 16:32
Bank of Korea Gov. Lee Ju-yeol said Tuesday that while lingering political deadlock has held back talks to renew a currency swap deal with Japan, Korea would not be rushing it, during his visit to Zurich to sign a swap agreement with Swiss National Bank.

“The talks of extending a deal (with the Japanese central bank) are being suspended since the deal expired, in the wake of a diplomatic and political row (between Korea and Japan),” Lee told Korean correspondents in Zurich on Tuesday.

“It‘s hard to say when the talks would be restored,” he added. 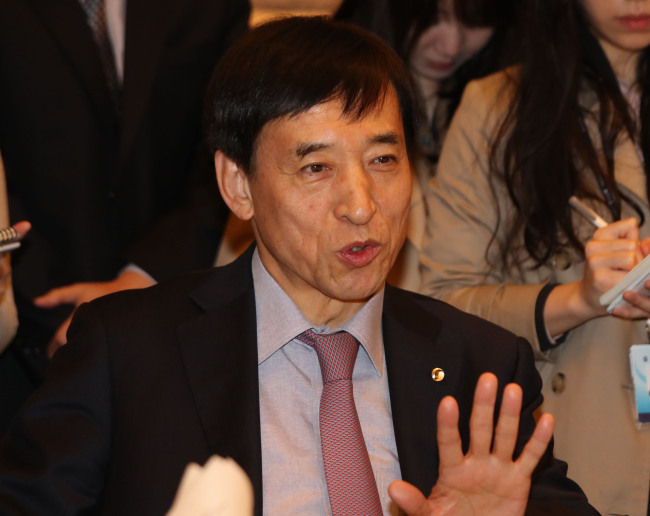 BOK Gov. Lee Ju-yeol (Yonhap)
The foreign reserve pool for the Korean won and Japanese yen has been nonexistent since the $10 billion deal expired in February 2015. From its inception in July 2001, the pool’s volume had reached $70 billion at its peak in 2011.

The two sides had agreed to start dialogue for a currency swap renewal with Japan in a ministerial-level meeting in August 2016. The talks, however, have been suspended since January 2017. Japan withdrew from the talks citing Korea‘s refusal to relocate a comfort women statue -- a symbol of Japan’s wartime atrocity involving Korean wartime sexual slaves -- in front of Japan‘s consulate office in Busan.

Lee of the BOK said conditions for the discussion is all set, but Korea’s central bank would not rush to resume it with Japanese counterpart,

Other than Japanese yen, Lee said the BOK is open to currency swap deal talks involving the UK pound with the Bank of England, once all procedures regarding Brexit are complete. 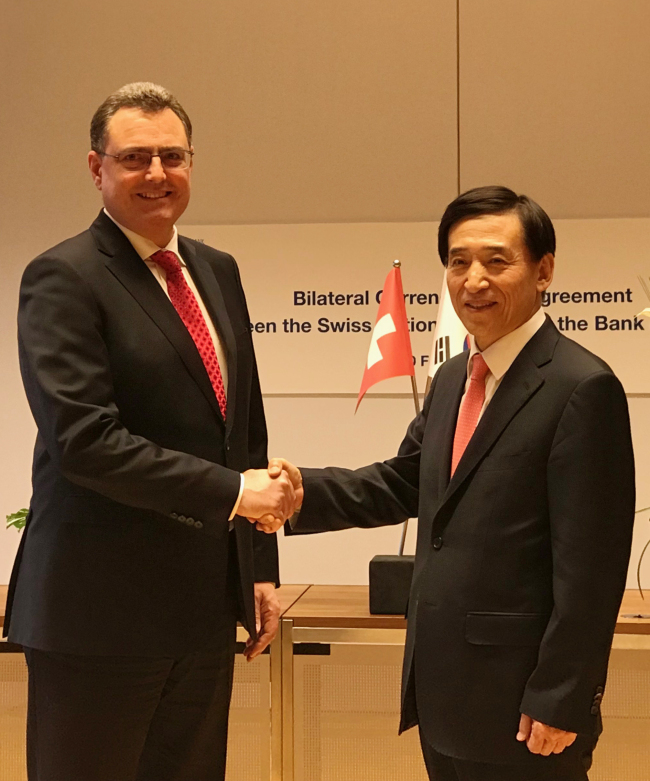 Bank of Korea Gov. Lee Ju-yeol (right) poses with Thomas Jordan, chairman of the Swiss National Bank`s governing board, after signing a bilateral currency swap deal in SNB headquarters in Zurich, Switzerland, Tuesday, in this photo provided by the BOK. (Yonhap)
The remarks came shortly after the BOK signed a bilateral currency swap deal with Switzerland’s counterpart Swiss National Bank in Zurich. The deal will allow the two central banks to purchase and repurchase Swiss francs using the Korean won, and vice versa, up to 10 billion Swiss francs ($10.6 billion), or 11.2 trillion won in local currency.

The deal will become effective on March 1 and can be extended upon a bilateral agreement after a three-year maturity period. Following the deal, the Swiss franc will become one of the two key currencies, along with the Chinese yuan, that can be purchased or repurchased using the Korean won.

Lee hailed the deal, saying it represents the SNB’s “acknowledgement that the Korean economy has robust fundamentals.”

Lee also said it took less than one year to prepare the deal, and the deal was designed to brace for widening volatility in financial markets at home, as more key rate hikes by the US Federal Reserve loom.

This came after the BOK renewed a currency swap deal involving the Chinese yuan with the People’s Bank of China in October 2017, and clinched a new deal with the Bank of Canada the following month.

Other than China and Canada, the BOK has run bilateral foreign currency reserves pools with United Arab Emirates, Malaysia, Australia and Indonesia. In addition, Korea is involved in the Chiang Mai Initiative Multilateralization, through which Korea can purchase and repurchase currencies of Southeast Asia nations from a multilateral reserves pool of $38.4 billion.