Sipila arrived in South Korea on Saturday for a six-day visit on the occasion of the PyeongChang Winter Olympics. The trip includes a visit to the athletes‘ village and attendance at Olympic events involving Finnish athletes.

During Monday’s meeting, Lee said that the two countries have maintained close relations since establishing diplomatic ties in 1973 and that bilateral relations have expanded in recent years to various areas, including the defense industry, the environment and Arctic development, according to Lee‘s office. 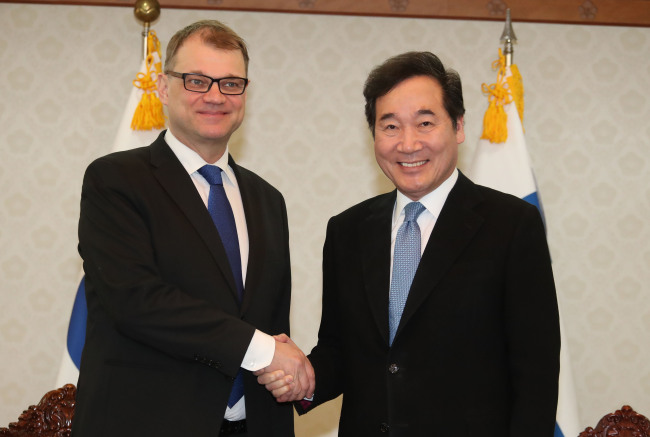 Sipila said the two countries have great potential for industrial cooperation as they have similar industrial structures, such as information and communications technology, and expressed hope for greater cooperation with South Korea in science and technology and for greater Korean investment in Finland.

Lee briefed Sipila on recent developments in inter-Korean relations and asked for support for Seoul’s efforts to bring permanent peace on the Korean Peninsula.

Sipila said Finland fully backs South Korea‘s efforts for a peaceful and diplomatic resolution of the North Korean nuclear issue and expressed hope that the PyeongChang Olympics will contribute to peace on the peninsula, according to the office. (Yonhap)