PyeongChang was her fourth and possibly her last Olympics, and Lee was aiming for a third straight gold in front of her home crowd. But it was Japan’s Nao Kodaira who took the gold with an Olympic-record 36.94 seconds, becoming the first Japanese female speedskater to win an Olympic title. Lee, a longtime friend of Kodaira, had to settle for silver with a time of 37.33 seconds.

Lee crying in public was an unusual sight for most of her fans, as the athlete had been known for not showing her emotions after her races. For PyeongChang Lee had to overcome a chronic injury in her leg, which required almost 18 months of rehabilitation on top of training. When she finally got off the bench in tears and stepped onto the ice for the lap of honor, it was Kodaira, having also battled enormous pressure from her home country, who put a comforting arm around Lee’s shoulder and gave her a hug -- while the crowd kept chanting Lee’s name. 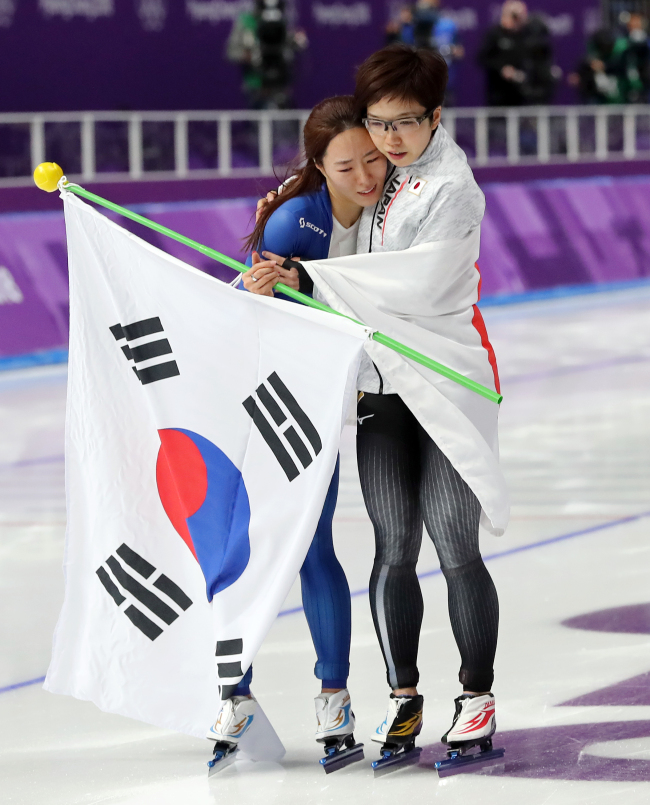 South Korea`s Lee Sang-hwa (left) is being comforted by Japan`s Nao Kodaira during their lap of honor at PyeongChang Winter Games on Sunday. Lee claimed her silver, while Kodaira won the gold in Women`s 500-meter speedskating final. (Yonhap)
“After the race, Kodaira told me she’s proud of me and respects me,” Lee told reporters after the awards ceremony. Lee and Kodaira have been friends since their middle school years.

“I told her I’m also very proud of her,” Lee said.

The two athletes, Lee holding her Korean flag and Kodaira having her Japanese flag wrapped around her back, skated together side-by-side during the lap of honor -- another rare sight considering the thorny South Korea-Japan relations. And it was a touching sight for many of Lee’s fans, who may have been witnessing the end of Lee’s remarkable Olympic career. (Lee earlier said she might compete at the Beijing Games in 2022.)

In 2010, Lee surprised the world by becoming the first Asian woman to win an Olympic speed skating title. Not many, even those in South Korea, predicted Lee’s win in Vancouver.

Even after her historic win, she did not stop. In 2014, at Sochi, she won her second straight 500 gold with an Olympic record time. Russian skater Olga Fatkulina, who claimed silver in that race, famously compared Lee and her speed to renowned Jamaican sprinter Usain Bolt.

“I didn’t want people to think that my Vancouver win was a pure luck,” Lee told reporters at the time. “I had to work extra hard to prove myself to the world once again.”

For Sunday’s race at PyeongChang, Lee had delayed surgery for a chronic injury to her left knee. She still received a dramatic ovation from her home crowd, in spite of failing in her bid to win gold on home ice.

After the event finished one race later, the athlete sobbed as she skated round the track. Kodaira, her long-term friend, was skating by her side.

“Since the 2006 Turin Games to PyeongChang this year, Lee competed in a total of four Olympic Games and won two golds and one silver,” said a tweet by a user named Park So-ryong, which has been retweeted 42,000 times as of Monday afternoon.

“She was 16 when she attended her first Olympics, and now she is 28. I saw her sobbing face (after Sunday’s race), and as TV commentators said, I couldn’t even imagine what it must be going through her head at that moment.”

“I didn’t cry because I didn’t win a gold medal,” Lee told reporters. “(I cried as) I realized it was indeed over. I have no regrets. It was such an honor to compete on home ice.”

Lee’s remarkable career is appreciated by many sports fans, especially those who have followed her career since the Turin Games.

“No one would have blamed her if she retired after Vancouver or Sochi,” said Lim Ji-eun, a 31-year-old office worker in Seoul. “But she did not choose the easy way and kept on going. I’m grateful that I got to watch her compete for so many years. She truly is one of the greatest athletes of our times.”

What grabbed attention following the race on Sunday was inarguably Lee’s friendship with her Japanese rival Kodaira, who comforted Lee during the lap of honor.

Kodaira, 31, shared a number of memories of Lee, including what happened at the 2014-15 ISU Speed Skating World Cup which was held in Seoul. At the competition, Kodaira had won the gold for Women’s 500-meters, while Lee claimed the silver.

“I had to leave for Netherlands, where I was training at the time, right after the competition immediately,” Kodaira told reporters. “Sang-hwa did not win the race at the competition, but she had no hard feelings for me. She grabbed a cab for me so that I could go to the airport as soon as possible, and even paid for my cab-ride. I was very grateful and touched by her kindness.”

“I really respect and look up to Sang-hwa as a human being and a skater,” she told Japanese reporters.