Shiffrin, who claimed gold in Thursday's giant slalom, finished fourth and said she had vomited at the start gate.

"Not very well," she said when asked how she felt at the start.

"I don't know, it was kind of sudden. It almost felt like a virus kind of puking, less about nerves." 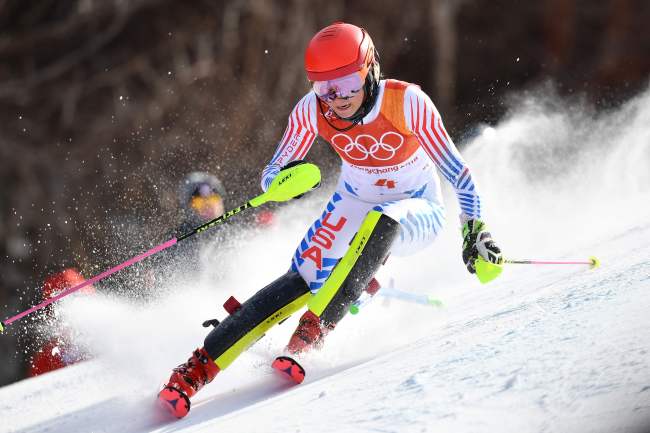 USA's Mikaela Shiffrin reacts after competing in the Women's Slalom at the Jeongseon Alpine Center during the Pyeongchang 2018 Winter Olympic Games in Pyeongchang on February 16, 2018. (AFP-Yonhap)
The multiple world champion came in 0.48sec behind Switzerland's Wendy Holdener's leading time of 48.89sec down the Rainbow 1 course in bitterly cold, bright conditions.

Also ahead of the American were Swedish duo Frida Hansdotter, a three-time world slalom medallist, and Anna Swenn Larsson.

Shiffrin looked visibly deflated coming over the line, taking a few still moments to herself, head down and face covered by gloved hands, before moving off to shelter from the chill.

"I'm not super psyched with it," said the 22-year-old, who is also the three-time consecutive world slalom champion.

"It was OK, a bit conservative. I guess I got through to the finish.

"I know that I have a lot more speed in me, I've just got to let it go down the hill a bit more in the second run, it'll be quite a bit faster."

Shiffrin added: "The surface is still really nice, you can be super clean. Unfortunately I wasn't clean enough, but I'm looking forward to the second run."

Asked what it would take to win the race, Shiffrin said it "won't be anything special". 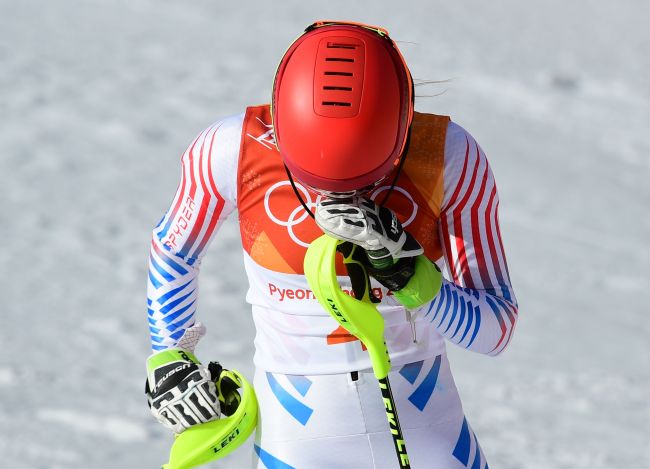 USA's Mikaela Shiffrin reacts as she crosses the finish line in the Women's Slalom at the Jeongseon Alpine Center during the Pyeongchang 2018 Winter Olympic Games in Pyeongchang on February 16, 2018. (AFP-Yonhap)
- Later to bed -

Shiffrin revealed she had gone to sleep later than usual because of the giant slalom medals ceremony but refused to blame fatigue for her first-run performance.

Holdener has good slalom form, having become the first Swiss woman in 20 years to finish on the podium in the slalom at the world championships with second place in 2017, an event where she also won combined gold.

"For the second run, I need to try to do the same as the first run: concentrate on my skiing, stay calm and do my best," the 24-year-old said.

"I had a good start, but I didn't think it was the best run."

The second leg will be set by her own coach, Werner Zurbuchen, but Holdener insisted there would be no advantage.