After scoring a momentous goal in a loss, joint Korean women's hockey team forward Randi Heesoo Griffin was feeling a mixed bag of emotions on Wednesday.

Griffin, born to a Korean mother and an American father in North Carolina, scored the lone Korean goal in the second period of a 4-1 loss to Japan in Group B action at the PyeongChang Winter Olympics, at Kwandong Hockey Centre in Gangneung. It was the first goal by a Korean hockey team, male or female, in the Olympics.

But Griffin was also a bit of scapegoat. Japan scored two power play goals in the game, and Griffin was serving the penalties in both instances.

The 29-year-old was overcome with emotion after the game, and said she felt "a mixture of sadness and pride."

"I am very, very proud of the way our team played today's game. 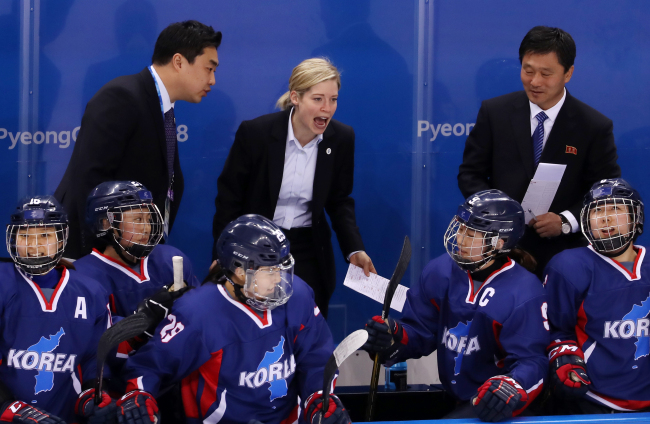 Sarah Murray, the Canadian coach of the unified Korean women’s hockey team, stands and cheers after her team scored Korea’s first-ever hockey goal in any Olympics. Yonhap
This was the best game we've played against Japan," she said at a post-game press conference. "But obviously, I am disappointed with the outcome of the game. There's definitely sadness that we lost.

During second period, we had a lot of momentum and I felt we had a chance to win."

Prior to Wednesday, South Korea had lost all seven meetings against Japan, by a combined margin of 106-1. Keeping the game tight Wednesday was "a big step forward for our program," Griffin said.

Griffin's shot was one of 13 Korea had on goalie Akane Konishi, and perhaps the strangest one of all. Griffin secured the puck after defenseman Marissa Brandt bounced it off the glass, but only got off a weak shot, which rolled harmlessly toward the net.

But Konishi went down to her knees a tad too early, and let the puck bounce off her right pad and trickle into the goal.

Given her Korean-American heritage and presence of North Korean teammates, Griffin was asked if it felt weird to have scored a goal for three different countries.

"It doesn't feel weird. This is my team. I scored a goal for my team," she said. "It was a pretty crappy shot that took a couple of bounces and and went into the net. The most important thing is the team put up a lot of offense today, and a lot of other shots had a chance to go in. I got lucky."

Griffin, a former Harvard star, said she was inspired to take up hockey in earnest after watching the U.S. women's team win gold at the 1998 Nagano Winter Olympics. She's now hoping to inspire Korean girls who might otherwise go into speed skating or figure skating to start playing hockey.

"I think the opportunity to come here and play in South Korea, which right now isn't a big hockey country, is largely about trying to grow this game here," she said. "I love coaching, I am looking forward to getting back into that when my playing career finally finishes for real. If this impacts that in any way, it'll probably be because I am doing a little coaching in Korea."