Seoul Central District Court also ordered Choi to pay a fine of 18 billion won ($16.6 million) and the forfeiture of 7.3 billion won. The ruling came 450 days after she was indicted in 2016. 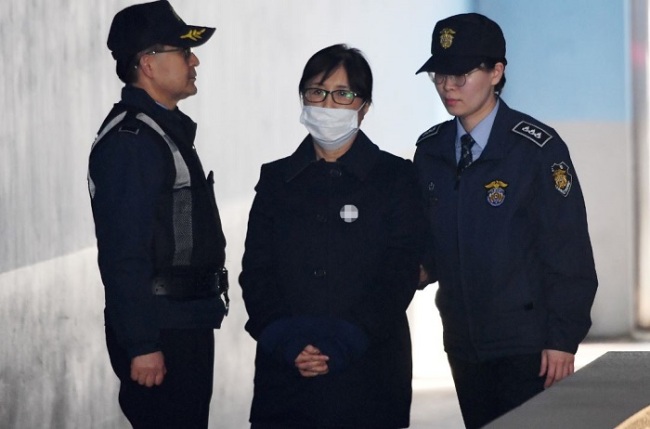 Choi Soon-sil (Yonhap)
The court also sentenced Lotte Chairman Shin Dong-bin to 2 1/2 years in prison and the forfeiture of 7 billion won for giving bribes in exchange for business favors. Shin was taken into custody after the sentencing. Former presidential aide An Chong-bum was sentenced to six years of prison and a fine of 100 million won for corruption.

In passing the sentence, the court found Choi guilty on a number of charges, including bribery, coercion and abuse of power. Choi’s lawyer said the court’s decision is too harsh and she would file an appeal.

“Choi’s actions shook the order of society, causing great confusion which led to an unprecedented impeachment of a president,” the judge said. “Her meddling in state affairs disappointed the citizens, but she has not shown any remorse and consistently denied her charges. Severe punishment is unavoidable.”

The court said that Choi had colluded with Park in ordering conglomerates to provide financial support and illicit business contracts to two foundations – the K-Sports and Mir foundations -- and affiliated organizations.

The prosecutors had demanded 25 years in prison, a fine of 118.5 billion won and forfeiture of 7.7 billion won for Choi, arguing the civilian friend took advantage of her 40-year ties to Park and abused authority to disrupt the order of the government and private businesses.

The prosecutors argued that Choi had extorted 77.4 billion won from 50 businesses, forcing them to donate to two nonprofit foundations that she ran.

The corruption scandal has sent many of Park’s aides, high-profile government officials and business tycoons to trial and jail.

The court ruling on Choi is expected to affect the sentencing of Park, slated for late March, as most of her charges occurred in collusion with the former president.

The disgraced ex-leader is also standing trial over the scandal, but has refused to show up in court in protest of the extension of her detention, claiming she is being made a target of “political revenge.”

Choi already received a three-year prison term in a separate corruption case for abusing her power to get her daughter admitted to a prestigious university, despite her lacking qualifications.

Lotte Chairman Shin was sentenced for providing bribes of 7 billion won to the K-Sports Foundation operated by Choi in return for a favor. The court found that Shin sought government support in obtaining a license to operate a duty-free shop in Seoul, after losing its previous license in 2015.

Samsung Electronics Vice Chairman Lee Jae-yong was released on appeal as the higher court cleared him of major charges and handed down a suspended sentence.

As for Park’s former senior presidential secretary An, the court found him guilty of colluding with Park and Choi in abusing his power to coerce businesses into supporting the two foundations and make unfair contracts. He was also charged with receiving bribes from a plastic surgeon.