Kim, born to South Korean immigrants in the United States, won the women's halfpipe with a score of 98.25 points at Phoenix Snow Park in PyeongChang, some 180 kilometers east of Seoul. She became the youngest American woman to win gold in a snowboard event.

"I think today I really did it for my family and everything they've done for me," Kim said at a press conference. "I think I'm so grateful for that."

Kim has often visited South Korea in the past to meet her relatives and go shopping. When she visited her parents' country to compete at her first Winter Games, what she thought of first was her family.

"When I landed and realized that I've won the first (gold medal), words that came into my mind were mom, dad and family," she said. "I don't know how I'm going to celebrate tonight. When I go home back to the US, probably my mom would throw a little party for family and friends."

Kim's relatives, including her grandmother and aunt, were all present to see her gold medal performance. Kim said her third and final run, for which she got her top score, was for her grandmother.

"My grandma has never seen me compete before," she said. "I actually found out after my second run that she was at the bottom, so (I said to myself) this one is for gran. Being able to put that down was awesome. I hope she enjoyed watching it." 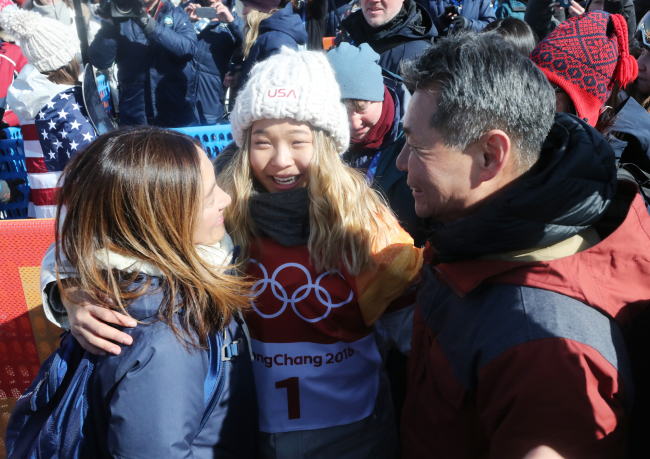 Korean-American snowboarder Chloe Kim hugs her parents after winning the gold medal in the women`s halfpipe of the PyeongChang Winter Olympic Games at Phoenix Snow Park in PyeongChang, Gangwon Province, on Tuesday. (Yonhap)
Kim already posted 93.75 points in her first run. She made a mistake in her second run to score only 41.50 points.

Before she hit the third run, Kim was already declared the winner because the second highest scorer Liu Jiayu of China failed to overcome the 90-point mark in her last run. However, Kim showed her best performance in her final ride to score 98.25 points.

"Going to my third run, I knew that I was taking home a gold, which was (a) very insane feeling that I can't even explain right now," she said. "My third run was just for me ... just show myself that I can do it."

Kim already made headlines on Monday as she dominated her qualifying runs, with both scoring more than 90 points. But what made her more famous were her tweets ahead of her runs. On Monday, she posted that she wanted to have an ice cream, and on Tuesday, she tweeted about not finishing her breakfast sandwich.

Apparently, she was hungry for gold and literally just hungry.

"(I want to have) like some burger, and fries, and maybe some Hawaiian pizza," she said. "Honestly, I'll eat anything at this point. I'm so hungry."

And as a 17-year-old teen, Kim said she is just amazed about how things are happening around her.

Kim said her first Winter Games experience has been nothing but perfect.

"This is the best outcome I could have ever asked for," she said. "It's been such a long journey. Just going home with a gold is amazing." (Yonhap)