[ The Korea Herald – Send E-mail ]
[Video] Humanoid robots compete for gold in alpine skiing on sidelines of PyeongChang Olympics
Self-driving robot skiers race down the slopes in the world’s robot ski tournament hosted by South Korea
By Sohn Ji-young
Published : Feb 12, 2018 - 22:20
Updated : Feb 14, 2018 - 12:34
HOENGSEONG, Gangwon Province — “Skiro, who showed an impressive performance in the first round is off to a steady start. He passes through the red gates successfully! He makes a great turn to the right at the right speed!”

Though they may seem like the words of any regular sports commentator, this announcer was describing a skiing tournament with a difference — the world’s first ever humanoid robot ski competition, organized by South Korea on the sidelines of the PyeongChang Olympics.

(Shot and edited by Park Ju-young)
On Monday, eight self-driving humanoid robots built by local tech companies and universities gathered at a local ski resort in Hoengseong County near the Olympic venues in Gangwon Province to vie for the gold in
slalom skiing. 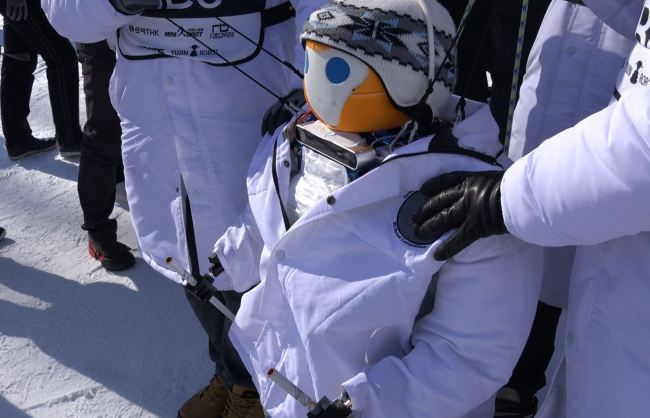 Decked out in professional ski suits and winter hats, the two-legged robots wearing a pair of skis skid down the slopes without human intervention, giving spectators a glimpse of South Korea’s latest robotics technology.

They competed on an 80-meter giant slalom alpine skiing course, which requires them to zig-zag through five flag gates marked by colored poles.

One point was awarded for each gate passed. The robots are evaluated based on the number of points they receive and their finishing time.

The robots took part in three rounds at 10 a.m., 11 a.m. and 2 p.m. The best performance out of the three rounds counted toward the competition.

Though the mere sight of robots skiing down the slopes was enough to draw the attention of curious spectators, the robot skiers showed a mixed performance at best.

Hit hard by the biting cold and strong winds, many of the participating robots malfunctioned and crashed midway, while some successfully maneuvered themselves down the slope to arrive at the finish line. 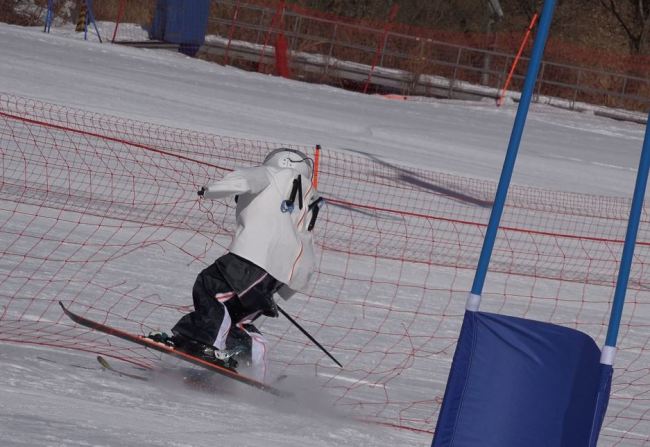 A robot crashes while competing in the Ski Robot Challenge at the Welli Hilli Park ski resort in Hoengseong, Gangwon Province. (Park Ju-young/The Korea Herald)
So, how are these humanlike robots able to ski on their own?

Most of the robots in the competition worked by combining two core technologies — vision sensing and motor movement. They’re equipped with radars and vision sensors to recognize their own position and the location of the red and blue-colored flagpoles.

Using this information, the humanoid robots are programmed to make the correct motor movement, such as slowing down to the right speed by maneuvering its leg movement, and making the appropriate turn to the right or the left so it passes through each flag gate.

Though the routine may seem simple, making the robots chart the right paths down the slope on their own involves lots of complex engineering. Its motors have to mimic the actions of human muscles.

Even the slightest changes in external conditions could hamper the robot’s performance and its ability to chart its path, explained Sam Kim from Mini Robot Corp., the winner of Monday’s competition.

“Because they’re not humans, robots sometimes cannot recognize different shades of red as the same color. So during the competition, they might not have processed the color of the flag poles because of the sunlight, leading them to get their paths confused,” Kim, director of tech sales at Mini Robot Corp. told The Korea Herald. 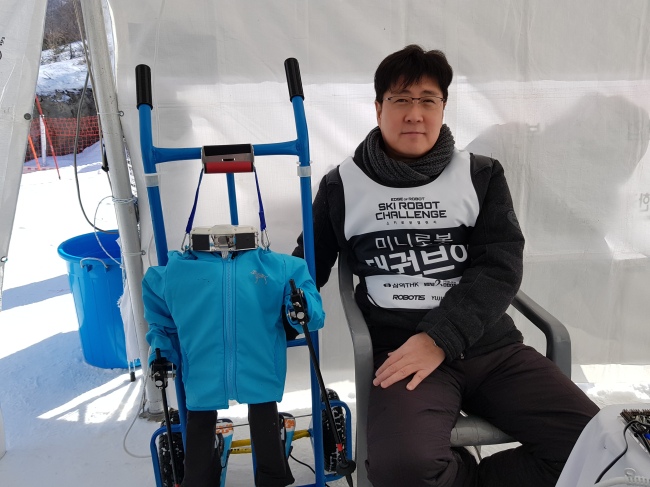 Sam Lee, director of tech sales at Mini Robot Corp. which developed Taekwon V, the robot that won the self-driving skiing mission on Monday (Sohn Ji-young/The Korea Herald)
In addition to the color sensing capabilities, a robot’s performance hinges most on its motor control. “It’s all about building a motor that is able to quickly process the vision data it receives and adjust its motor movements accordingly fast enough to make a turn,” Kim added.

Mini Robot’s robot skier, the Taekwon V which is 75 centimeters tall and weighs 12 kilograms, placed first in the self-driving ski mission with five points and a time record of 18 seconds.

In second place was Skiro, built by the Pohang-based Korea Institute of Robot and Convergence at a height of 80 cm and weighing 15 kg. It received five points and set a time record of 22.25 seconds.

In third place was Kookmin University’s robot RoK-2, 140 cm tall and weighing 30 kg. It earned 2 points by passing through two flag gates with a finish time of 15.46 seconds, according to organizers.

“The fact that robots can now ski on their own is really amazing. Skiing is difficult for even humans, but that robots can balance and ride on skis is so surprising,” said Chae Yeon-suh, a 31-year-old female who watched the event. 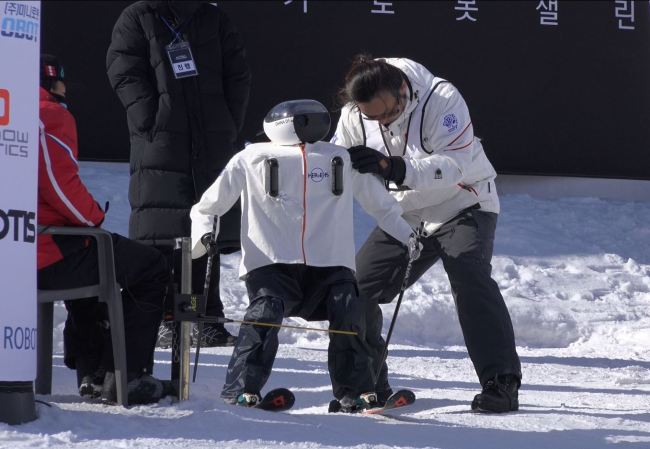 Monday’s robot ski tournament was organized by South Korea’s Ministry of Trade, Industry and Commerce in partnership with the Korea Institute for Robot Industry Advancement as part of efforts to give a high-tech spin to the ongoing PyeongChang Winter Olympics.

As the host of the 2018 Winter Games, Korea has pledged to take advantage of the opportunity to flaunt its technologies to the rest of the world, including its advanced robotics which tends to receive less international spotlight compared to its smartphones and internet technology.

“Though South Korea is internationally famous as an IT powerhouse, its robotics technologies are not as well known to the outside world. Through the robot ski competition, we wanted to show that our robotics capabilities are fairly advanced, in addition to IT,” said the Mini Robot executive.

Moreover, Korea’s ability to build robots goes far beyond merely offering the public a high-tech spectacle in sports. The technologies built in to the self-navigating humanoid robots will form the basis of various robots able to perform dynamic, humanlike motions, said Chung Hyun-joon, who led the development of Skiro at the Korea Institute of Robot and Convergence. 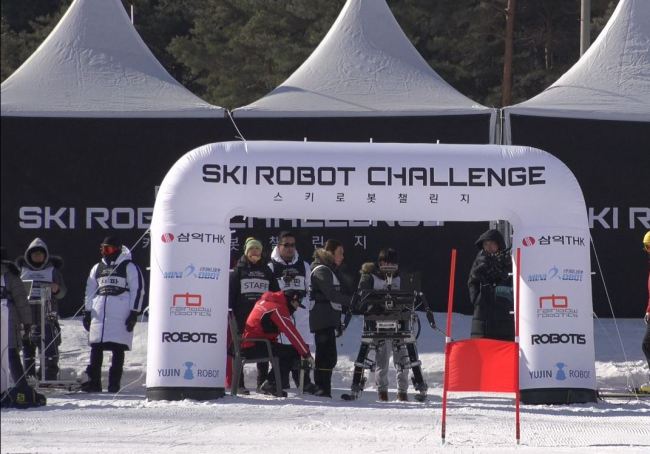 Robots compete in the Ski Robot Challenge at the Welli Hilli Park ski resort in Hoengseong, Gangwon Province. (Park Ju-young/The Korea Herald)
“Unlike other industrial robots, these humanoid robots (like the skier robots) are able to perform various dynamic motions similar to humans. And further developing robots on this front will lead to new breakthroughs that we have yet to imagine,” Chung said.

In addition to the ski tournament, which was held as a one-time event, South Korea’s PyeongChang Olympics committee is featuring 85 robots in 11 types across the Olympic stadiums, event venues and the main media center during the games.

Other robots deployed at the PyeongChang Winter Games include a wall-painting robot able to create complex murals on demand based on a given topic, as well as entertainment bots that project the schedule of the games every day for reporters covering the games.