Throughout the 210 kilometer test-drive from Hyundai Motor Studio Goyang in Gyeonggi Province to PyeongChang, Gangwon Province, the quietness of the hydroelectric sport utility vehicle continued, gliding smoothly on the highway at over 100 kilometers per hour.

It was rather wind noise that Hyundai seemed to have missed to conceal, as it was difficult for the driver to talk with the person in the back.

And Nexo does not produce any emissions, according to Hyundai. It produces electricity by fusing hydrogen and oxygen, water is the only byproduct of Nexo, which makes it an emission-free eco-friendly car. 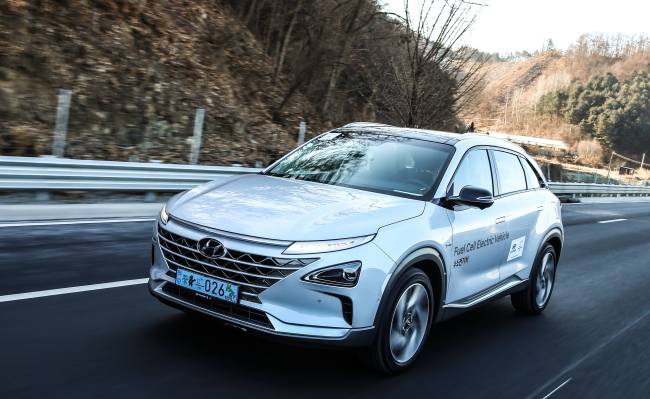 The Nexo FCEV drives down a highway to PyeongChang, Gangwon Province, during last week‘s media test drive. (Hyundai Motor)
After the 210 kilometer-long drive, the amount of air purified shown on the cluster measured at 157.1 kiloliters.

According to Hyundai, 10,000 units of Nexo on roads would have the equivalent carbon reduction effect of planting 600,000 trees, and purifies fine dust emitted by 20,000 diesel vehicles.

The highlight of Nexo was its self-driving technology.

With a licensed researcher from Hyundai in the driver’s seat, a 7 kilometer-long demonstration of Nexo‘s level four automation took place at a designated area near PyeongChang Medal House for about 10 minutes.

Set on automated mode, Nexo changed lanes, made left and right turns, and controlled speed within the 50 kilometers per hour limit when necessary based on real-time information.

According to Hyundai, Nexo perceives traffic lights on KT’s 5G inter-vehicle communication that sends details on the time left until the light changes.

It added, reading traffic lights by color can be dangerous due to changes in brightness depending on sunlight.

The futuristic touch of Nexo is also seen through the flush door handles that automatically pop out when the driver with the smart key approaches.

For the first time among Hyundai’s SUV models, Highway Driving Assist that supports level two automation has been installed in Nexo.

By setting the smart cruise control at 110 kilometers per hour, the Highway Driving Assist took over the steering wheel for about two minutes, after beeping and warning signs.

Nexo also marks Hyundai’s first vehicle equipped with Lane Following Assist that helps drivers stay in the middle of the lane at high speeds of up to 150 kilometers. It is an upgraded version of the Lane Keeping Assist System that prevents cars from going out of a lane, the company explained. 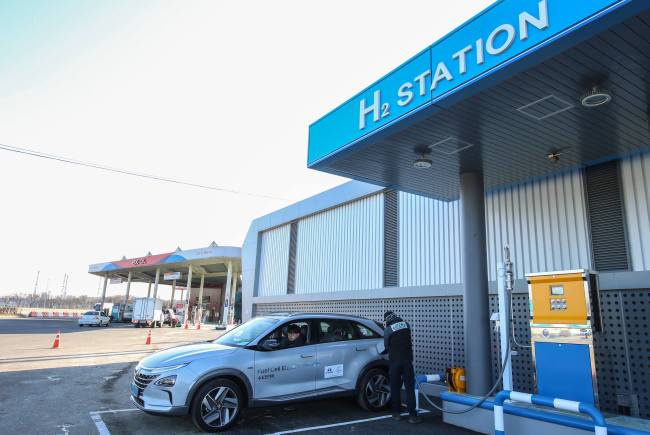 A hydrogen charger is located at Yeoju rest area on Yeongdong Expressway, headed for Gangneung, Gangwon Province. (Hyundai Motor)
Was it because of the unfamiliarity of hydrogen vehicle? The question of safety of hydrogen tanks was constantly raised.

Shooting and explosion tests of hydrogen tanks had been carried out to ensure safety, the company said.

At Yeoju rest area, where a hydrogen charger is located, it took about five minutes to fully charge 6.33 kilograms of hydrogen in Nexo.

This is notably shorter than Ionic EV that takes 24 minutes with a high-speed charger, officials said.

Hyundai plans to release Nexo here next month when it will introduce the official price.

The driving distance of the hydrogen-powered car is at 609 kilometers per charge, the longest among its rivals. Toyota Mirai has a driving range of 502 kilometers and Honda’s Clarity is 589 kilometers.