The local organizers said that, as of Saturday, 158 cases of norovirus infections have been confirmed, but no athletes have been affected by the outbreak. Of the infected, the organizers said 139 have recovered, while 19 are still being monitored in order to prevent any risk of the illness spreading.

The contagious virus is known to cause stomach pain and diarrhea. 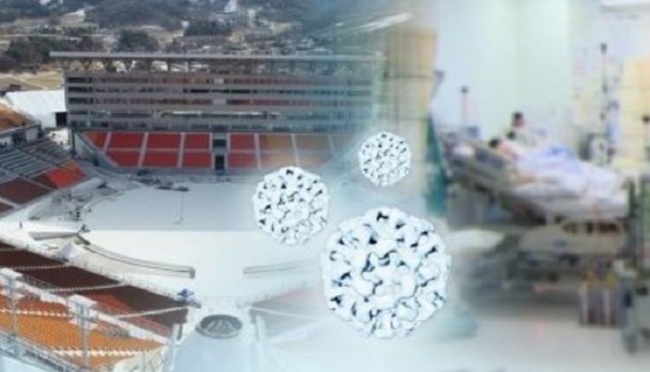 (Yonhap)
Budgett said the IOC has full confidence in local health authorities including the Korea Centers for Disease Control and Prevention.

"The KCDC is working in a special task force with the local organizing committee and with the IOC in attendance to actually drive the prevention program and to deal with the case of norovirus," Budgett said during a press briefing at Main Press Centre in PyeongChang, 180 kilometers east of Seoul. "I'm very impressed with the way they are doing that."

Of those who were infected, most were reportedly civil security staff and volunteers. To cope with the possible shortfall in the workforce due to quarantine procedures, the organizers said previously that hundreds of military personnel have been deployed to take over their work.

"It's is very hard when you're running a Games withdrawing whole groups of support staff just because one or two people are ill, but that's what they are doing," he said. "They're doing everything that is necessary and appropriate according to the best international standards."

Budgett, Olympic rowing gold medalist for Britain in 1984, said the IOC has been closely working with the World Health Organization when it comes to a mass gathering event like the Olympic Games. He said the IOC and local health authorities will try their best to help athletes stay healthy during their time in South Korea.

"It's just one of those unfortunate things in the Winter Games that you do get more illness than in the Summer Games or other times of the year, because (in) January, February and March you've got things like norovirus and things like influenza," he said. "There's lot of influenza right throughout the northern hemisphere at the moment, so we have to keep vigilant with that as well." (Yonhap)