The invitation was delivered to Moon when the North's delegation paid a visit to him on Saturday. Moon said in response to the invitation that he hopes that the right conditions will be created so that the proposed visit will be realized. 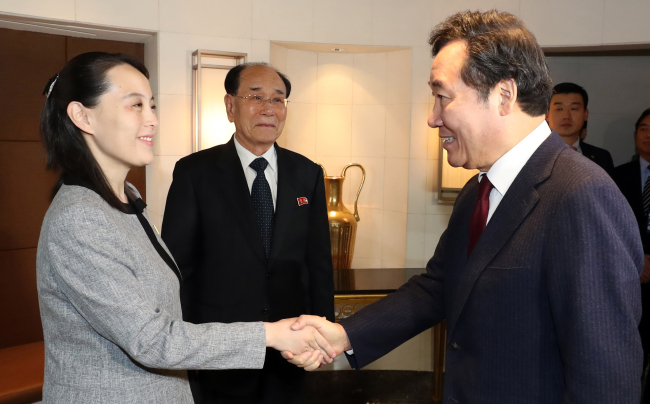 Prime Minister Lee Nak-yon (R) shakes hands with Kim Yo-jong, sister of North Korean leader Kim Jong-un, during a lunch meeting in Seoul on Feb. 11, 2018. (Yonhap)
The response was seen as meaning that there should first be progress on efforts to resolve the North Korean nuclear standoff, such as talks between the United Sates and the North, before what would be a third inter-Korean summit takes place.

During Saturday's meeting, Moon also called for the North to step forward to engage in talks with the US

"State Affairs Commission Chairman Kim Jong-un invited President Moon Jae-in to visit the North through a personal letter delivered by special envoy Kim Yo-jong," Lee said during Sunday's lunch, according to a text of his remarks provided by his office.

Lee also said that inter-Korean talks should continue after the Olympics.

Kim Yong-nam responded to the prime minister's remarks by saying, "I am sure that the two Koreas' relations will improve going forward, and the date of reunification will be advanced," the premier's office said, citing the North Korean official.

"I cordially propose a toast to you hoping that we make concerted efforts to advance the date of reunification," Kim was quoted as saying.

Sunday's lunch took place at the Walker Hill hotel in eastern Seoul. The delegation has been in the country since arriving Friday to attend the PyeongChang Winter Olympics. The delegation is expected to head back to the North later Sunday.

At the start of the meeting, Lee shook hands with the North's chief delegate and then with Kim Yo-jong, as well as other members of the delegation. The rest of the meeting was closed to the press, and further details were to be made available at a briefing later in the day.(Yonhap)