Among them, South Korean tech giant Samsung Electronics has set a strategy to enhance its end-to-end network business to provide fifth-generation technologies that will be fundamental to upcoming electronics powered by artificial intelligence.

The 2018 PyeongChang Winter Olympics will offer an opportunity to look at Samsung’s preparations for the 5G era.

Samsung will be showing its prototype 5G devices that look just like tablet PCs. The Samsung 5G devices will serve as a platform to control 5G services prepared by KT through the mobile carrier’s 5G radio base station in PyeongChang.

Samsung’s full lineup of 5G equipment and devices (Samsung Newsroom)
Samsung has been a lesser-known player in the network business, though it has grown into the world’s biggest smartphone maker.

However, starting with the Olympics, the company is gearing up for the upcoming 5G network with an aim to dominate the market by providing not only network technologies but also 5G chips, controlling devices and smartphones.

As part of the strategy, Samsung renewed a global patent cross-licensing agreement with Qualcomm on mobile devices and communications infrastructure on Feb. 1, extending their deal covering 3G and 4G networks in 2009.

Samsung is working with Qualcomm on the 5G wireless network, while the US-based tech mogul is preparing to launch 5G smartphones with some Chinese vendors.

By unveiling a full lineup of equipment and devices for the 5G network at the 2017 Mobile World Congress, CEO Tim Baxter of Samsung Electronics North America mentioned Samsung is a “5G company” that will show what will happen in the future when everything is connected based on Samsung’s 5G products.

The Korean tech firm embarked on the development of 5G wireless communications technologies five years ago, partnering with mobile carriers around the world.

Samsung will supply its 5G fixed wireless access, known as FWA, for US-based Verizon, for commercial use by the American mobile carrier in seven cities in the US -- one of which is Sacramento -- from the second half of this year to mark the first 5G wireless telecom service in the world.

Delivering the next-generation network to phone users is just one of many plans to be executed this year by Samsung, whose operating profit reached a record high of around 53 trillion won ($49.6 billion) in 2017.

Samsung is betting its future on the internet of things, artificial intelligence and car components, moving beyond its handset and consumer electronics businesses.

The “digital cockpit” in a luxury Maserati sedan showcased at the 2018 Consumer Electronics Show in January illustrates the smart mobility and life sought by Samsung. 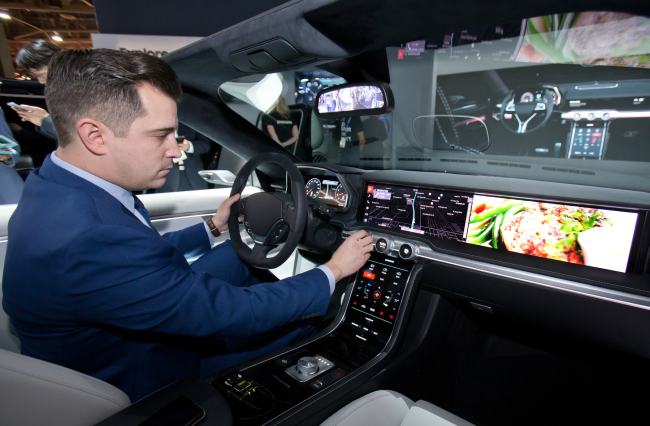 The “digital cockpit” is displayed at Samsung Electronics’ booth at the Consumer Electronics Show 2018 last month (Samsung Electronics)
Samsung’s AI platform Bixby will control the vehicle’s electronics, such as the air conditioner and audio system. The company’s IoT service SmartThings will connect the car with appliances at home.

Samsung and Harman have also developed Drvline, a safety platform for autonomous driving, which can be presented as a compilation of engineering, high-performance computing, sensor technologies, algorithms, AI, cloud and connectivity solutions.

“Future cars will be just like smartphones that are always connected to networks,” said Young Sohn, president and chief strategy officer of Samsung.

Samsung is also seeking to pursue innovation in the smartphone business this year, by launching two flagship premium models, the Galaxy S9 (and Plus) and Galaxy Note 9.

In addition to the existing models, Samsung said it would introduce the first foldable organic light-emitting display smartphone in 2018.

The company’s semiconductor division will enhance its focus on AI chips that will support operations of AI applications in various digital devices.

Its AI chips and IoT sensors will start to be applied to Samsung TVs, refrigerators and other home appliances this year, too.

In the latter half of this year, Samsung will launch an 8K quantum-dot light-emitting diode TV that is powered by an AI chip that raises standard definition content to 8K resolution by using a proprietary algorithm.

The company aims to connect all of its digital products with an integrated cloud platform by 2020.