The skater, who returned home from Germany on Monday, participated in the national team's training session at Gangneung Oval, after moving into the Gangneung Olympic Village earlier in the day. The venue will host speed skating events for the 2018 Winter Games.

Lee's archrival, Nao Kodaira of Japan, also trained at a similar time on the rink. For the two-time champion, Kodaira is considered a major threat to Lee's race towards another Olympic gold in the women's 500 meter. 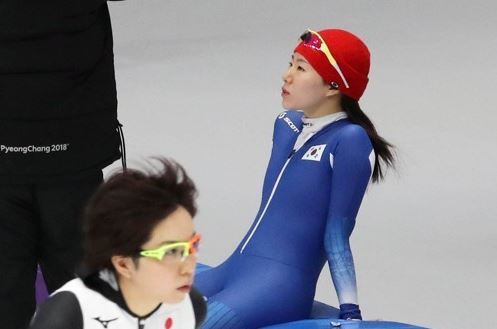 Japanese speed skater Nao Kodaira passes by South Korea's Lee Sang-hwa during training at Gangneung Oval, located in Gangneung, 230 kilometers east of Seoul, on Feb. 6, 2018. (Yonhap)
Upon her arrival in Gangneung, Lee told reporters that she plans to try hard, while saying she does not want to be compared with Kodaira.

Other teammates joined Lee's training on Tuesday, with athletes from the Netherlands, the United States, Canada, and Russia also skating around the rink with the South Korean team.

Park Seung-hi, a former Olympic short track champion who switched to speed skating in 2014, said she feels comfortable ahead of her third Olympics.

"Although I was kind of nervous before, I think the competition will be fun," Park said after her training session. She will compete at the women's 1,000-meter race in PyeongChang.

"It is my first Olympic, and everything seems new, but the atmosphere of the ice rink was not different from other competitions," female skater Kim Min-sun also said.