"After he won nationals and earned his spot to come to the Olympics, he came back to Toronto as a different person," Brian Oser told reporters after wrapping up Cha's first practice session at Gangneung Ice Arena three days before the opening of the PyeongChang Winter Olympics. "He was stronger; he was faster. He's pretty excited."

Cha, 16, will make his Olympic debut at PyeongChang after staging a dramatic rally to snatch the lone Olympic berth for Korea in the men's singles event at the nation championships last month. He had been trained in Toronto, Canada, with Oser before arriving in the Olympic city Monday. 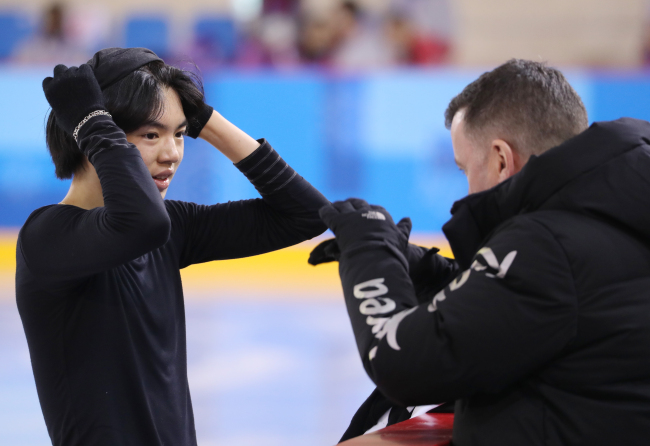 (Yonhap)
Oser said his student is well recovering from a cold and remaining in good condition to give his best performance at the Olympics, where men's figure skating competitions are scheduled on Feb. 16-17.

Oser said Cha will try only one quadruple jump in his free skating at the Olympics to go through a safe, clean program, while many world-class male figure skaters like Japanese Yuzuru Hanyu will attempt a number of quad jumps in the high-risk, high-return discipline.(Yonhap)