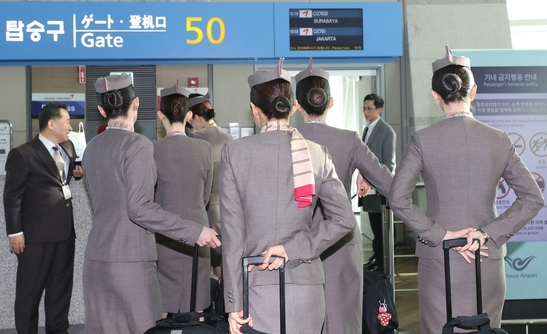 File photo. The people in this image are unrelated to the article. (Yonhap)
Park, 73, heads the country’s second-largest carrier Asiana Airlines, and makes monthly visits to the headquarters of the carrier. He purportedly calls over female flight attendants in the lobby when he visits, who then “cheer, clap and hug their boss,” according to posts on Blind, an anonymous chat app for local employees.

One anonymous post said Saturday that female flight attendants and airline staff of Asiana Airlines were ordered by executives to “run to Park and put their arms around him and hug him” as part of the company’s greeting ceremony for Park, taking place once a month in the company’s lobby early in the morning.

Blind users who said in the anonymous message board that they work as flight attendants at the carrier said they were consistently exposed to unwanted physical contact with the chairman during the greeting.

Allegations they shared include that Park pulled them toward him and held their hands, while those who seemed reluctant to do so were later “sent to the executives and reprimanded.” Also during the company’s orientation program for newly hired employees, female flight attendants reportedly had to compose a song to greet Park ahead of his visit and “practice ways to elicit tears,” one of the users wrote.

“We are being treated like Kim Jong-un’s Pleasure Squad,” read one of the posts, referring to the North Korean leader’s rumored group of women to see to the entertainment of high-ranking officials. “And this should stop now.”

Regarding allegations of sexual harassment, a Kumho Asiana Group official denied any wrongdoing.

“The claims are not verified,” the official told The Korea Herald. “And the monthly visit to the headquarters “is part of the company’s ‘on-site management policy’ to encourage employees,” the official added.

The new allegations come after a South Korean public prosecutor went public with a story of being sexually harassed by a senior official and then demoted when she complained.

In an effort to bring the #MeToo campaign to a hierarchical society where sexual harassment is too often tolerated, local district prosecutor Seo Ji-hyeon said in a televised interview last month with a local cable news network that a senior prosecutor groped her during a mourning dinner in 2010.

Seo said she raised the issue with her superiors to obtain an apology, but was instead transferred to a remote village. Seo said she “wanted to encourage other victims to speak out,” adding, “I want to say to all sexual assault victims that it’s not your fault.”

Her exposal has sparked anger with the public, prompting the prosecution to carry out an investigation into sexual harassment within the organization.