Nike has manufactured official Olympic jerseys for the seven other nations in the women's tournament at the Feb. 9-25 competition.

The US company had also designed one for South Korea, but its 23 players will not get to wear it, as they've been joined by 12 North Koreans on an unprecedented joint team. 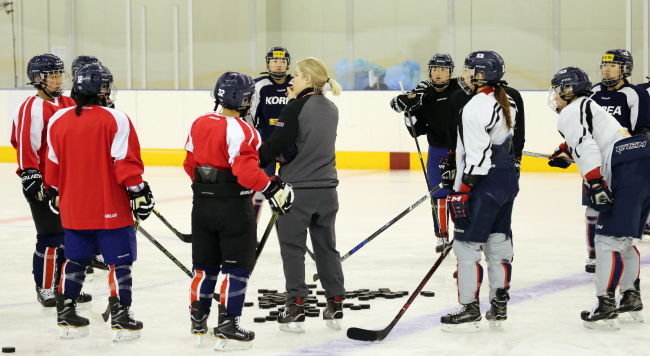 (Yonhap)
When announcing the decision to allow the combined hockey team last month, the International Olympic Committee said the team will wear a uniform bearing the image of the Korean Peninsula.

A Korea Ice Hockey Association official said the new Korean jersey has been designed by Finnish company Tackla. While Nike makes uniforms for the Olympics and the top-tier International Ice Hockey Federation World Championship, Tackla does the same for lower-tier IIHF events.

"The joint team uniform will be delivered to Jincheon National Training Center on Saturday," the official said, referring to the team's training base in Jincheon, 90 kilometers south of Seoul. The official added he couldn't reveal further details about the uniform.

The players will put on the Tackla jersey for the first time on Sunday, when they take on world No. 5 Sweden in their only pre-Olympic tune-up match in Incheon.

The puck drop is at 6 p.m., and the players will travel to Gangneung Olympic Village, their residence for the Olympics, after the game.(Yonhap)