PYEONGCHANG, South Korea -- The chiefs of the PyeongChang Winter Olympics athletes' villages said Wednesday they are ready to welcome participants in the quadrennial multi-sports event and help them stay comfortable.

Ryu Seung-min, a former Olympic gold medalist in table tennis, is at the helm of the main Olympic Village at PyeongChang, where athletes in snow events like alpine skiing will reside, and Kim Ki-hoon, a former short track speed skater, is in charge of the Gangneung Olympic Village, home to athletes competing in ice sports such as skating and ice hockey.

"International Olympic Committee President Thomas Bach was satisfied with the athletes' village made up of apartment complexes," Ryu, who as an IOC member accompanied Bach during his PyeongChang visit Tuesday, said. "I'm doing my best to create the best environment for athletes and help them feel at home." 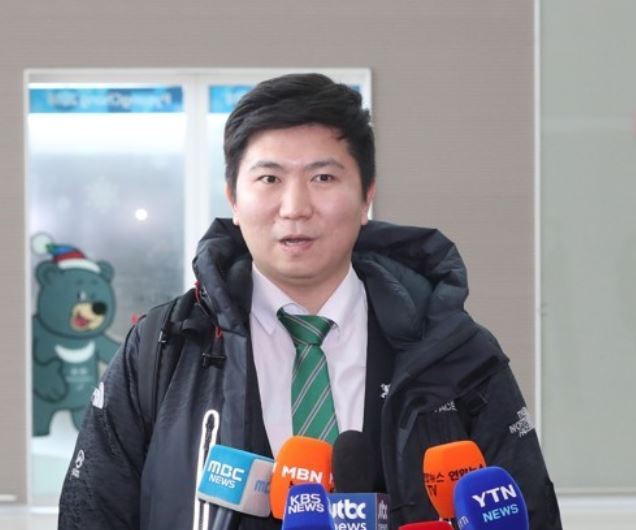 In this file photo taken on Jan. 18, 2018, Ryu Seung-min, the lone South Korean member of the International Olympic Committee (IOC), speaks at Incheon International Airport before heading to Lausanne, Switzerland, to attend an IOC meeting. (Yonhap)
Bach arrived in South Korea on Tuesday and looked around Olympic venues, including the athletes' residences. He will chair some key IOC meetings before and during the Feb. 9-25 competition.

During his visit to the headquarters of PyeongChang's Olympic organizing committee on Tuesday, Bach asked Ryu if he himself is cleaning the facilities before the Thursday opening. Ryu answered that he is making final touches on everything to greet thousands of Olympians, including cleaning.

"(The) villages are ready. We'll do some cleaning tomorrow," he said.

"I'll be far busier when the village opens on Thursday as there will be a rush of athletes," Kim, who brought South Korea its first Winter Olympic gold medal in 1992 at Albertville, said. "I'm paying more attention to providing a cozy and comfortable place to them."

Official opening ceremonies will be held at 2 p.m. on Thursday, with many sports heavyweights, including Lee Hee-beom, head of the PyeongChang Winter Olympics organizing committee, and Do Jong-hwan, the Minister of Culture, Sports and Tourism, scheduled to attend.