[ The Korea Herald – Send E-mail ]
Hundreds of thousands petition to demand removal of politician from PyeongChang Organizing Committee
By Jo He-rim
Published : Jan 24, 2018 - 18:23
Updated : Jan 24, 2018 - 18:23
More than 200,000 people have signed an online petition demanding the removal of a conservative lawmaker from the PyeongChang Organizing Committee for the 2018 Olympics and Paralympics, prompting an official response from the presidential office.

She also said in the email that the North is trying to take advantage of the Olympics as a way to propagandize its communist regime, which goes against the political neutrality stated in the Olympic Charter. 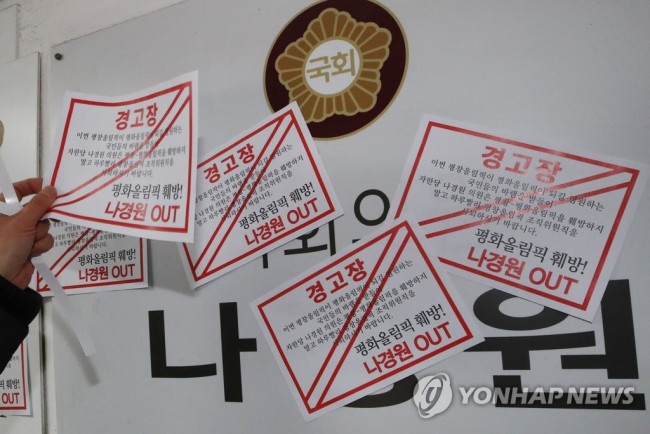 Warning stickers reading, "Na Kyoung-won OUT" are plastered on the placard of Rep. Na Kyoung-won. (Yonhap)
As of Wednesday afternoon, more than 248,000 citizens had signed the online petition posted on the Cheong Wa Dae website, calling for the politician to be expelled from the preparation committee here.

The petition stated it was inappropriate for the lawmaker to abuse her power and position to send such a message to the IOC. It also said it is absurd for Rep. Na to think that South Koreans would be manipulated by the “propaganda” of the North.

The number of signatures collected exceeded the 200,000 required for an official response from the presidential office four days after it was posted Saturday. The rule for the government petition site is that Cheong Wa Dae should give a direct answer to a petition that garners the required number of signatories within 30 days.

Earlier in the day, a union of 56 civic organizations held a press conference in front of Rep. Na’s district office in Dongjak-gu, Seoul, demanding her resignation from the committee. A left-wing civil group lodged an official complaint with Guro police station against Na and Yuriko Koike, the governor of Tokyo in Japan, for calling the PyeongChang Olympics as “Pyongyang Olympics.”

The inter-Korean agreement related to the participation of North Korea in the Feb. 9-25 Winter Games has been controversial, as the details included forming a joint women’s ice hockey team.

Rep. Na has explained that she welcomes the participation of the communist regime in the Olympics, but she opposes the joint ice hockey team as it infringes on the rights of South Korean players.

The inter-Korean agreement, such as a joint concert at Geumgangsan in North Korea on Feb. 8 and joint ski training in Masikryung Ski Resort in the North, violate international sanctions on North Korea, according to the lawmaker.