MELBOURNE (AFP) - World number one Rafael Nadal faces three weeks out after being diagnosed with a torn inner hip muscle during his Australian Open quarter-final defeat, his management said Wednesday.

The 16-time Grand Slam champion had a scan in a Melbourne hospital after he retired early in the fifth set of his match with Croatia's Marin Cilic on Tuesday.

"The MRI (scan) showed a grade one injury of his illiopsoas on his right leg," his management said in a statement. 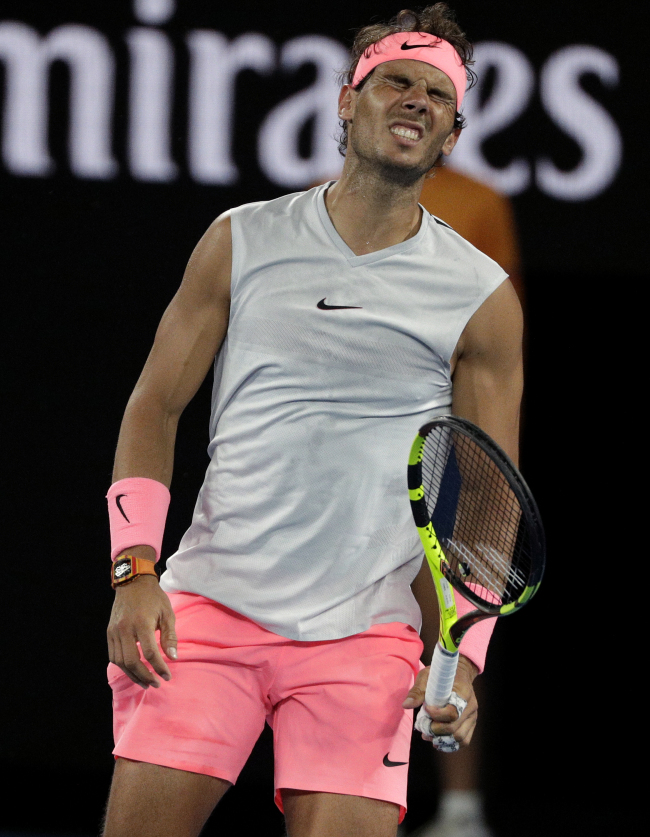 (Yonhap)
"He will be resting over the next days once back in Spain and will start with anti-inflammatory physiotherapy.

"He will start his rehabilitation and pre-adaptation process to the tennis court in two weeks, starting progressively his training and practice."

The Nadal team said the Spanish star was expected to be fully recovered in three weeks and could resume playing in Acapulco late next month.

"Three weeks is the normal time to totally recover and he will resume his tennis schedule as planned, playing Acapulco, Indian Wells and Miami," the statement said.

The Spaniard was forced to withdraw when trailing Marin Cilic 0-2 in the fifth set and called on tour organisers to do more to halt injuries to top players.

His comments followed the withdrawals of Andy Murray and Kei Nishikori before the tournament started and Novak Djokovic struggling ahead of his exit on Monday.

"Somebody who is running the tour should think a little bit about what's going on. Too many people are getting injured," Nadal said.

"I don't know if they think a little bit about the health of the players. I don't know if we keep playing on these very hard surfaces what's going to happen in the future with our lives."

It was the second time Nadal had been forced to pull out with injury in Melbourne after calling it quits in the third set of his 2010 quarter-final against Andy Murray with a knee problem. (AFP)