In a statement that began with the words “Pyongyang, PyeongChang, pyeongwha (peace in Korean)” senior presidential press secretary Yoon Young-chan on Sunday attempted to appease critics and highlight the Moon Jae-in administration’s plans.

“Voices of concern over North Korea’s participation in the PyeongChang Olympics and forming a unified women’s ice hockey team are being raised by the media and the political circle,” Yoon said in the statement. 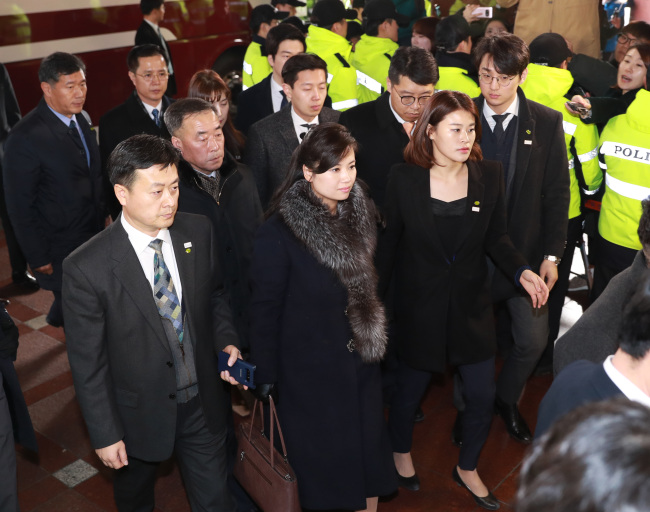 Hyon Song-wol (center, front row) visits a hotel in Seoul on Monday escorted by South Korean officials under heavy police presence. Yonhap
He went on to say that related concerns arise from hopes for the success of the games and that the presidential official will listen closely to criticisms.

A majority of the statement was dedicated to reiterating the Moon Jae-in administration’s hopes to use the inter-Korean talks on the Olympics to engage Pyongyang in a wider range of issues, including denuclearization.

Pyongyang, however, has made it clear from early on that it has no intention of discussing denuclearization. Ri Son-gwon, Pyongyang’s chief delegate at the Jan. 9 talks, expressed displeasure at related South Korean media reports, and stated at the time that North Korea’s missile and nuclear programs are “not an issue between South and North Korea.”

Referring to recent Moon-Trump telephone conversations, Yoon said that Trump’s expression of support for inter-Korean talks could be interpreted as the US leader backing Moon’s intentions to use the opportunity to resolve security issues on the peninsula.

The two leaders spoke over the phone on Jan. 4 and Jan. 10. During the earlier conversation, Trump reportedly said that he supports inter-Korean talks “100 percent,” and that the US will not take any military action during the games in the later conversation.

Yoon’s address on Sunday appears to have achieved little in the way of easing fears raised by the conservative bloc.

Hong Joon-pyo, leader of the main opposition Liberty Korea Party, accused the government of placing the fate of the country in the hands of North Korean leader Kim Jong-un, claiming that pro-North Korean figures had taken over the government.

“(The administration) is being dragged around by Kim Jong-un’s false peace offensive and political show, turning the PyeongChang Olympics into the Pyongyang Olympics when completion of North Korean missile and nuclear programs is projected within three months,” Hong said at his New Year’s press conference Monday.

Critics of Seoul’s efforts to bring North Korea to the games have called the PyeongChang Olympics the “Pyongyang Olympics,” claiming that the games will only aid North Korea’s propaganda.

The level of protection and courtesy provided to North Korea’s delegation is also raising eyebrows.

The North Korean delegation -- a seven-member group led by the head of the Samjiyon Orchestra Hyon Song-wol -- inspected possible venues for performances by North Korean artists in Gangneung, Gangwon Province, and Seoul on Sunday and Monday, respectively.

The delegation was provided with heavy police protection in both Seoul and Gangneung. In the process, South Korean officials were observed treating the North Korean delegation with unusual courtesy.

A South Korean government official is said to have pushed aside a local journalist Sunday, cutting off questions being directed at Hyon, saying that she was “feeling uncomfortable” by the questions.

Later in the day, a local official was heard joking with Hyon in Gangneung that had North Korea informed the South of the delegation’s visit, a larger venue would have been built.

According to reports, Hyon was inspecting a gymnasium at the time, and had expressed dissatisfaction with its limited capacity.

The banter has been taken by some here as being overly concerned with pleasing the North Korean delegation.

Such minor developments aside, Seoul’s Ministry of Unification has yet to receive any explanation regarding delays in the North Korean delegation’s arrival in the South, adding fuel to views that Pyongyang has the upper hand. Hyon’s team was originally scheduled to arrive here on Saturday, but North Korea unilaterally called it off, only to dispatch officials on the following day.

Some are taking their protests further.

Led by Rep. Cho Won-jin of the one-seat Patriotic Party of Korea, a band of right-wing activities gathered at Seoul Station on Monday to protest North Korea’s involvement in the games.

The Patriotic Party of Korea was formed by Cho in protest of mainstream conservatives’ inaction in developments surrounding former President Park Geun-hye. Cho, the party’s only lawmaker and its chairman, claims that Park was framed and rejects the legitimacy of the Moon Jae-in administration.

“The patriotic citizens of South Korea oppose the Pyongyang Winter Olympics that promotes the North Korean regime,” Cho said at the rally.

Cho and his supporters also set fire to the North Korean flag and an enlarged photograph of North Korean leader Kim. The fire was immediately extinguished by police officers.